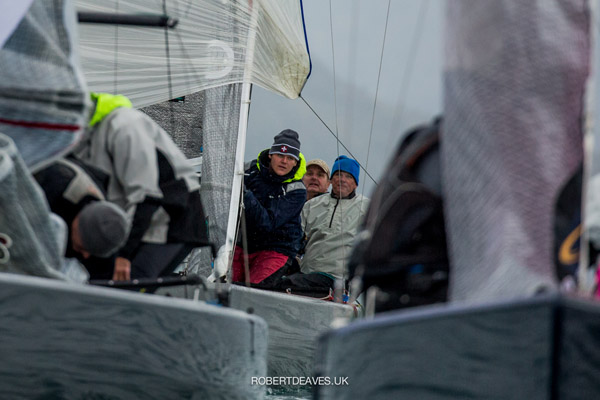 Winter arrives for Day 2 of 5.5 Metre Herbstpreis on Thunersee

Marie-Françoise XXI (SUI 232, Jürg Menzi Jürgen Eiermann, Christof Wilke) picked up a 2,1 on Day 2 of the 2020 Herbstpreis for 5.5 Metres at Thunersee YC on Saturday to consolidate their overnight lead. Pungin (SUI 213, Hans-Peter Schmid, Gilbert Dürr, Walter Dürr) also had a good day with a 3,2 to move up to second place while Skylla IV (SUI 182, Alex Bernheim, Andre Bernheim, Urs Werner) is down one place in third. 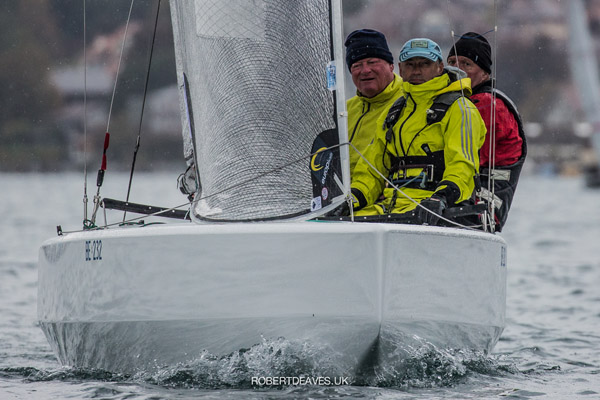 The first race was won by Black & White (SUI 219, Daniel Schenker Mark Dangel, Felix Schneebeli) on a day that can only be described as miserable with never ending rain, bad visibility and low temperatures.

In a pin end biased start line, Black & White led up the first beat in a big cross to the right and rounded ahead of Pungin and Marie-Françoise XXI. The wind was the best of the day, up to 7-9 knots at times and with driving rain. Marie-Françoise XXI moved up to second downwind wind and chased Black & White, on the final legs but could not catch them to cross second, ahead of Pungin.

Black & White The first attempt to start Race 4 was abandoned as the wind swung through the compass and died. A long wait ensued and as the rain became heavier and the air became colder a light breeze filled in from the south off the mountains. Marie-Françoise XXI made the best of the left side to lead round for a large win. Pungin completed a good day with a second place to move up to second overall while Skylla IV made up for a seventh in the first race of the day with a third to end the day third overall. 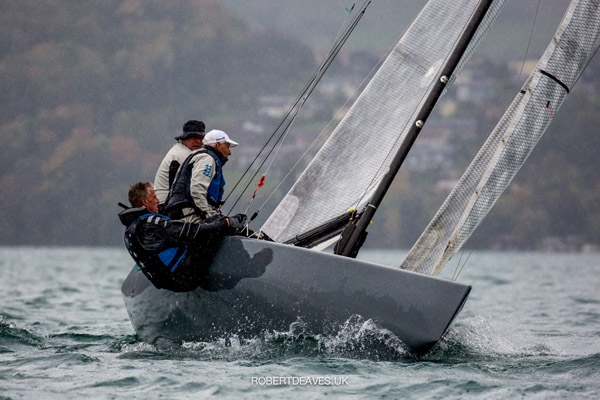 Mark Dangel, from Black & White, said, “The first race was a real race. The wind direction was fine as well as the strength.”

“We started near the pin end and got up nicely to the first mark and kept it all the way through the race. There were a lot of shifts but we tried to keep the fleet under control, which I think we managed quite well.”

“Marie-Françoise got quite close near the end, as did Pungin. At the downwind mark there was a windshift with a difficult position for the other two and we were on the leeward side so we had a bit more room to manoeuvre.”

“The second race started with a big wind shift and we missed it completely. While the fleet was on the left side getting a nice lift we were forced to sail around the mark twice, so that race was difficult.”

“I think the weather conditions have really shifted from the summer conditions we have had recently to normal fall weather and I don’t think they will go back now. Temperatures were about 12 degrees lower than yesterday and I think we were lucky not to have any snow…just rain.”

Walter Dürr, from Pungin explained their day. “In the first race, we started well but had some problems on the downwind mark and finished third. We were still happy as this year this is the first regatta we have sailed together. In the second race, again we started well and ended up in second place."

“Our skipper Hans-Peter is really happy as so far this year we have not had any races to sail, so he’s happy we are going so well. He is great to sail with. My brother and I have sailed with him for about 15 years now.”

“It is going well so far. We hope that tomorrow we are able to do some races.”

After two days, Marie-Françoise XXI has not done much wrong and looks to be heading for another Herbstpreis win. One day is left and while some forecasts are not particularly kind, some point to a sailable breeze during the day.