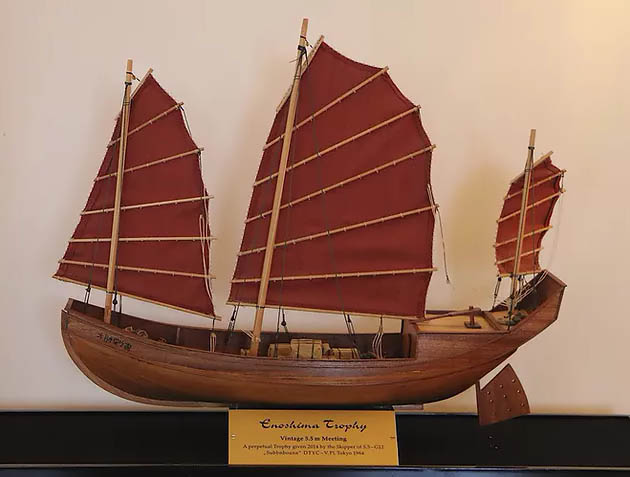 Since 2012 owners of 5.5m boats still in condition of the rules applicable in Olympic times, are meeting every two years for a special regatta. In 2014 Dr. Herbert "Biwi" Reich donated the "Enoshima Trophy" as the perpetual prize for these meetings.

The owners had chosen Berlin as the place for the 2016 venue, the Verein Seglerhaus am Wannsee (VSaW) being the host. The regatta was opened by the Japanese Ambassador to Germany, accompanied by his family. The official German Navy boat in Berlin took them out to the first race.

14 boats from 4 Nations had registered with VSaW and long distance travelers took their boats on trailers from as far as Helsinki, Venice, Milano, Amsterdam and many German harbours, to sunny Berlin.

Following the rules of the Deed of Gift, the regatta is featuring historic 10-5-0 starting procedures, have the boats sail the traditional Olympic triangle and the results are being calculated using logarthmics.

The races were showing a close competition, positions changed frequently. In the end 5.5 ITA 33 (Fabrizio Cavazza & Crew) had been showing an impressive performance, ahead of 5.5 GER 12 (Biwi Reich & Crew) and ITA 6 (Guiseppe Matildi & Crew). Biwi had also issued "Enoshima Trophy"-Diplomas (reflecting the 1964 diplomas) for places 4-6, which went to GER 11, GER 66 and ITA 32.

As already in 2014, some crews from Evolution & Modern boats took the opportunity to "test-race" the historic heritage of the Class, those Classic 5.5m boats.

The VSaW race committee chose 5.5 GER 35 "Struten" as the best looking boat of the racing fleet. A perpetual prize will be given given to the owner, and then to the next winner in 2018, in this category.

The hosting Club offered after race snacks & beer to the teams, a fabulous Regatta Dinner on Friday evening and a joyful Grill on Saturday. This combined with a perfect race organization on the water and a family style welcome at the club lead to many smiling faces.

The owners present in Berlin already announced their preferences for the next race location in 2018, having Aalsmeer, Attersee, Capri and Dyvig on the list, to be voted for, shortly.