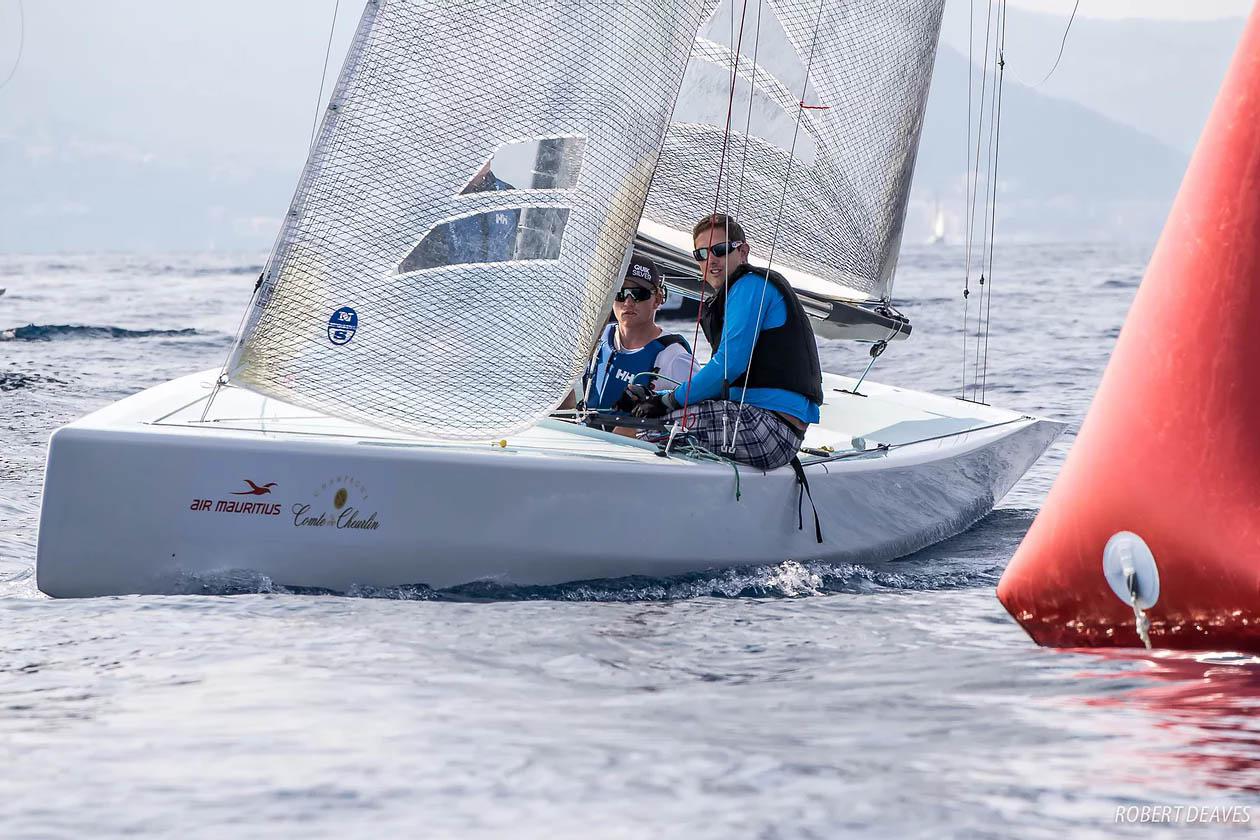 For the second year running, the elegant International 5.5 Metres are gracing the waters of Cannes as the class begins racing in the 39th edition of the Régates Royales Cannes. Only one race was possible on a very light and tricky day with the win going to Otto (Bent C. Wilhemsen, Andreas Dyhr and Luka Strahovnik).

In 2016 the class was reintroduced to the Régates Royales after many years absence, and this year the fleet has four days of racing alongside the Dragons, Tofinou one-designs and of course the increasingly popular Classics at this famous autumnal Mediterranean spectacle.

About to turn 70 years old next year, the class first came to prominence in 1948/9 when the famous naval architect Charles Nicholson developed an affordable and transportable design than some of the other previously popular Metre rule boats. The 5.5 Metre was soon selected for the 1952 Olympic Games, became an International class and it remained an Olympic Class until 1968.

Wilhemsen said of the day, “It was a good day for us. It was a bit challenging in the beginning because of light winds. We had one start that was cancelled because of too little wind and we exceeded 30 minutes before the top mark.”

“The next start went OK for us and we won that race. We had a good start, which was really important. Then we got free and played the wind shifts well, and that was the key to the race.”

They led from the first rounding to the shortened finish.

It is the team’s first season in the class.

“It’s a really nice keelboat and I like keelboats. I have sailed a lot of keelboats actually, so I kinda like this class. I like the people in it and I am based I Switzerland and it’s a big class there so that’s important for me."

He finished seventh in the recent world championship in Benodet, France. “It was a good event for us. We are looking at this regatta more as a training event.”

Second over the water in Cannes was New Moon (Mark Holowesko, Christoph Burger and Peter Vlasov), who placed second at the World Championship.

Holowesko commented, “It was very light and very shifty. We had six and a half hours in the boat for about an hour of racing.”

“The plan was to do three upwinds and downwinds, but the fleet only did two before the race was shortened.”

“It was a frustrating day, but every day you don’t fall apart in a drifter is a good day.”

With more light winds forecast for the rest of the week, it is something the crews here might have to get used to.

Racing in Cannes continues until Friday.