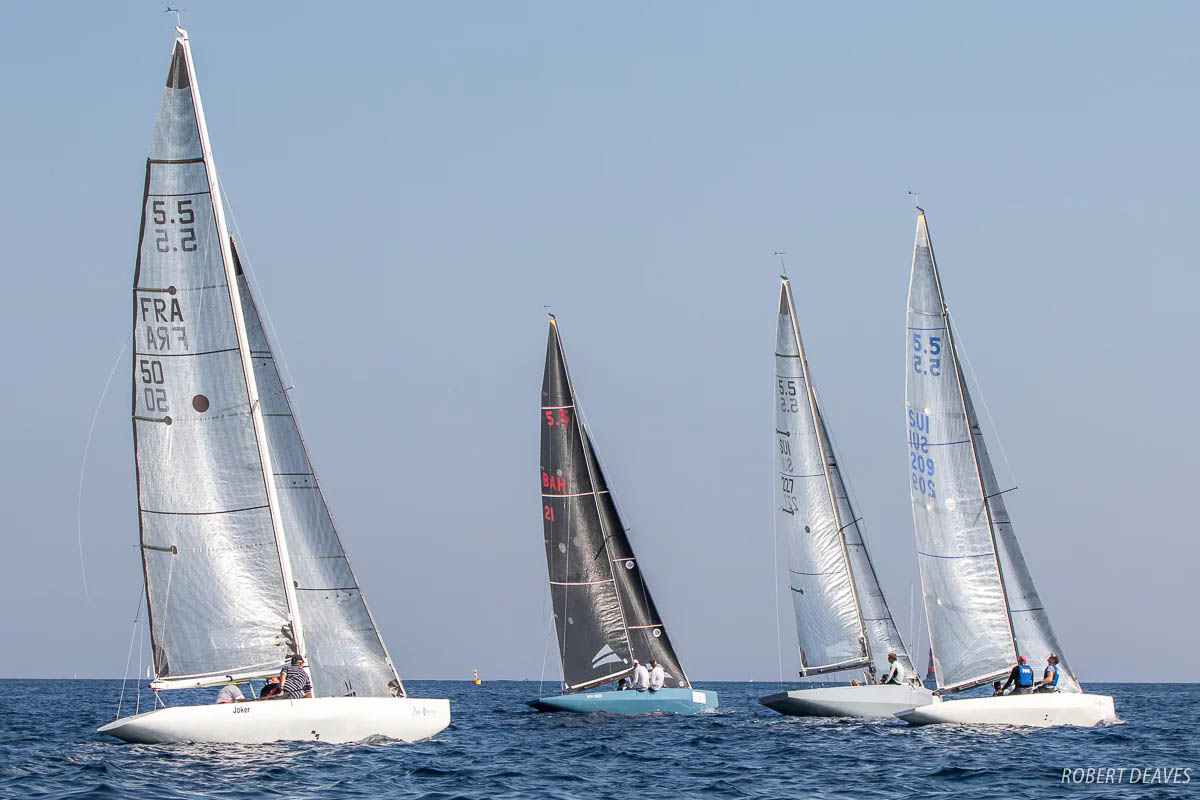 New Moon, BAH 21, showed a clean pair of heels to the fleet on the third day of the Régates Royales Cannes Trophée Panerai with two more race wins, to lead the fleet by two points going into the final day on Friday.

The light winds continued in Cannes, though while the 5.5 Metres only had 4-6 knots on their course area the classic fleet was treated to better breezes, building to 10-12 knots in the Bay of Cannes.

On Thursday, the fleet was held on shore for the first time, finally launching early afternoon for two more races in no more than 5-6 knots. In the first race New Moon (Mark Holowesko, Christoph Burger and Peter Vlasov) came off the line with superior speed in the light breeze and soon had a significant gap on the fleet.

Burger, explained, “It was light, but there’s a big difference between 2-3 knots and 4-5 knots. So two of us managed to sit on the windward side upwind and it’s a whole different game as in 4-5 knots true wind speed we aim to have about 4-5 knots of boatspeed and you can feel the boat, and can trim it. But in 2-3 knots it’s so difficult.”

“The first race was the more open. The start was very good with boat speed, no mistakes and good positioning. The wind was shifting 10-15 degrees so you could play them quite well.”

“In the second race, the first beat was quite even and then just before the first mark a 40 degree left shift kicked in. It was a little bit of an autobahn on the first run and they didn’t change the mark because we were racing on the same course as the Tofinou class, so we had to go autobahn again up and down and finish, which is a nice thing if you are in the lead, it keeps it simple, but not great racing.”

“It was super hard to manage, playing the middle and staying in front and playing shifts. You couldn’t really hit the corner, it was too much risk.”

“We were really happy with our performance today. In these conditions anything can happen.”

The 5.5 formula rule includes parameters for length, weight and sail area and pretty much anything goes as long as the answer is 5.5 metres. While some boats have been designed to the extreme limits such as a light hull with maximum sail area for certain conditions, most designs are a compromise to find the best all round performance.

The class has also cleverly segregated its fleet into three categories. Classic Evolution and Modern, for which the technical committee agrees parameters each year. Classics generally have longer keels with the rudder attached, while the Evolutions have separate keels and rudders and include all those built from 1970 to 1994. Moderns are those built after 1994 with the main difference being the use of trim tabs on the keels. All categories still race in the same fleet but each is assigned trophies with special events at the World Championship. 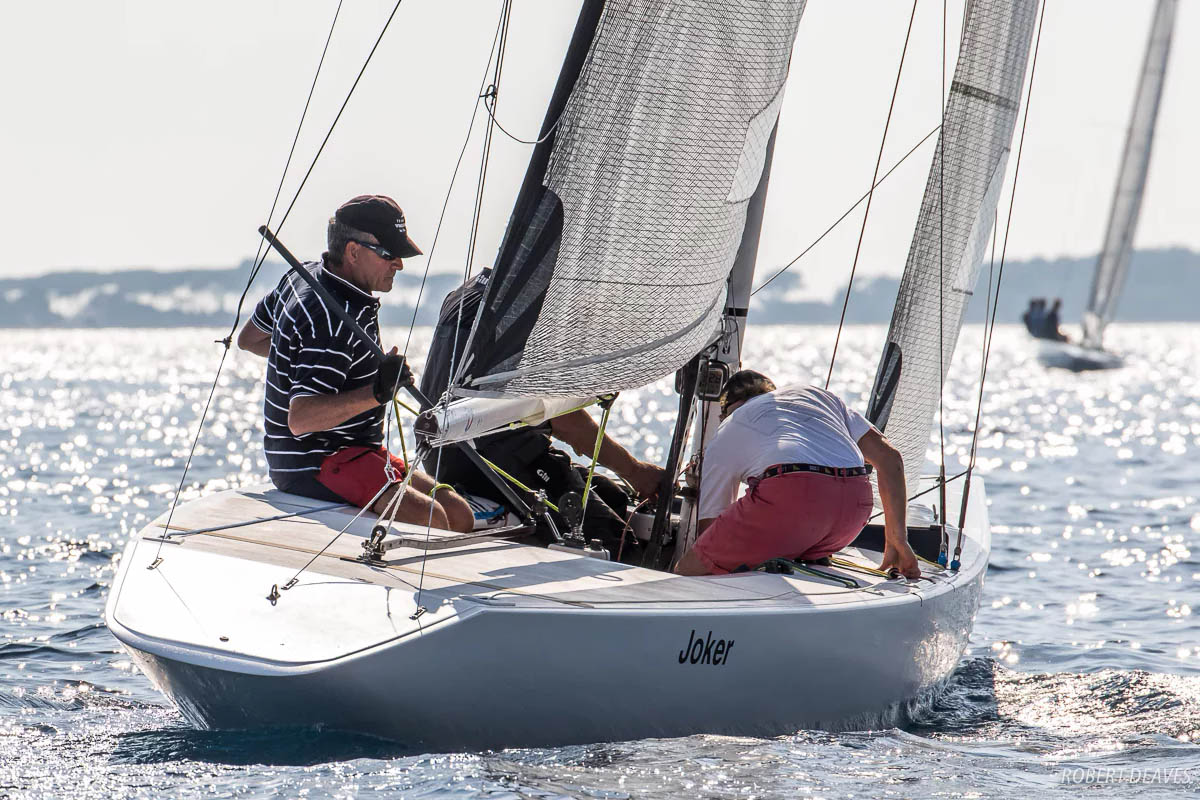 In a correction to yesterday’s story, there is one Evolution hull in Cannes, Joker, FRA 50 (Eric Polaillon, Paterne Foujols and Eric Lecoq).

Polaillon said, “It’s still a great pleasure to sail. The difference is not great. We are not far behind the others at the end of the race, maybe 20 metres or so.”

“We are the only Evolution here, so it is very difficult for us this year. The Germans are going well and so is Alain Marchand. We have no trim tab and still have an aluminium mast. It is also the oldest boat here at 24 years old. The shape is also different. It’s not the same generation.”

Someone who has moved from a Classic to an Evolution and finally to a Modern Wilke is Dr Henning Ueck. This week he is sailing Oro Nero, GER 55, (Dr Henning Ueck, Udo Dallmeir and Greta Boskamp).

“I started sailing the 5.5 by accident. In Germany they were not very popular, and in West Germany there were only a few boats being built for the Olympics. There were a few more in the East. And as a student I bought a wonderful wooden boat, that turned out to be a 5.5. It had wonderful lines, it was pretty fast, and we sailed it round Denmark and had our air mattresses inside. It was pretty fast with good steering. You could leave the tiller for half an hour, when a storm came through the boat would lift to windward and after that it would come back to leeward again. It was a perfect boat.”

“Then we had the first ever 5.5 Metre World Championship in Germany in 2001 and for that I got the boat repaired and we still came last. We had Dacron sails and it was not even measured. We went to the next worlds in 2002 and had new sails and we missed the last two races by stupidness and we were last again, so now we said we should renovate the boat or buy a new one, so we bought an Evolution hull and then we finally bought the Modern 2002 Wilke we have here.”

He says the boats are very sensitive to trimming. “Today we were too slow because our jib track was 3 cm too much in, but we only recognised it too late. It is very nice sailing, but you have to be very careful what you do.”

Racing in Cannes for the 5.5 Metres concludes on Friday. 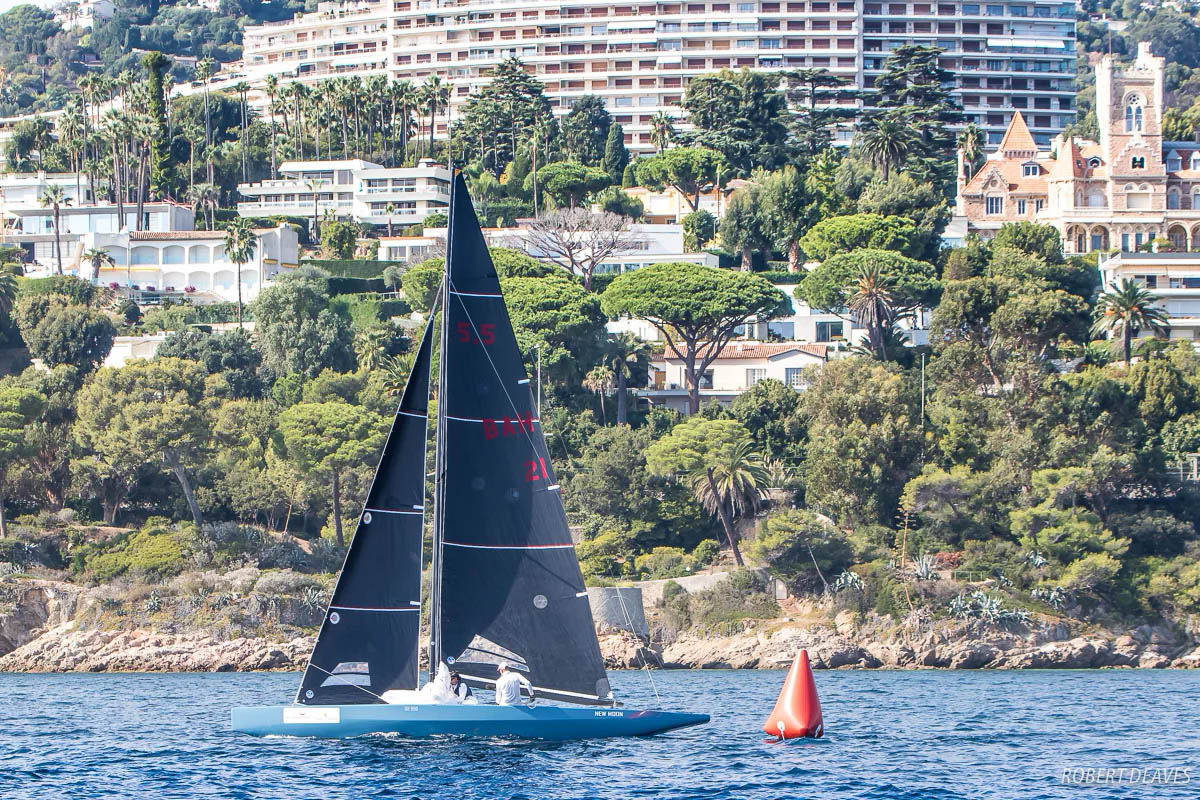