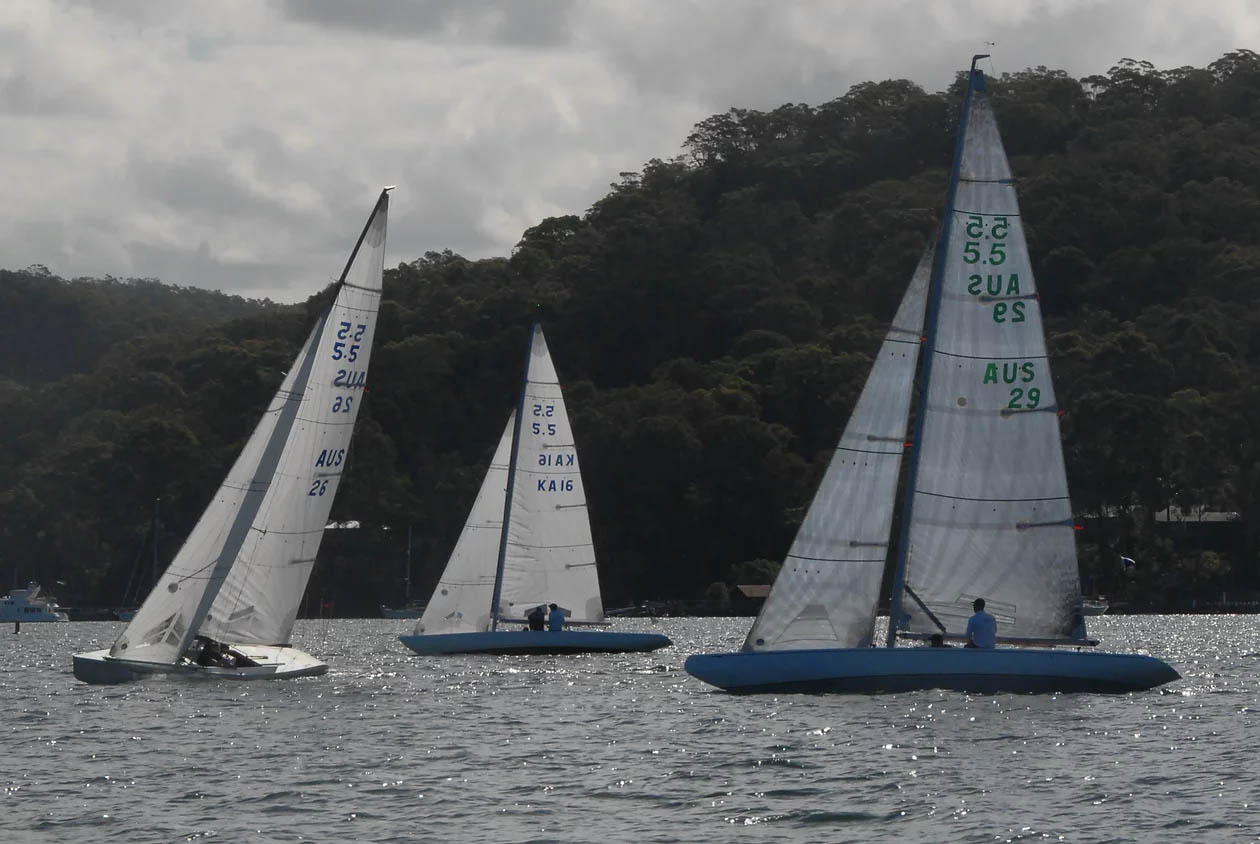 With 2018 being the 70th anniversary of the launch of the first 5.5m it seemed appropriate to hold a whole week of celebration on Pittwater. So the Festival of Fives was inaugurated. This year is also the 50th anniversary of the building of the first Five on Pittwater. The idea was to have 8 days of 5.5m racing over 9 days from 24th February to the 4th March, the highlight being the Australian National Championships. It was also a chance to showcase and demonstrate what these amazing boats can do in mixed fleet racing and encourage some more people to join the Royal Prince Alfred Yacht Club (RPAYC) fleet and participate, if the club’s application is successful, in the 5.5m Worlds in January 2020.

Saturday 24th February started the Festival with the Friends of Dave Booth race at Royal Prince Alfred Yacht Club. A handicap pursuit race down Pittwater around Lion Island and back. A difficult course for the Fives in about 10-15kts of Easterly breeze where waterline length counted. Fifty boats of all shapes and sizes started. Skagerak, Bob Stoddard won the race that mattered as the first Five but was 21st overall at the finish.

Tangalooma, Pete McNamara was second just behind, followed by Pam, Pete McDonald, Baragoola, Jason Antill and Antares, Martin Cross who parked up in the wind shadow behind Lion Island and was 12 minutes behind Skagerak. 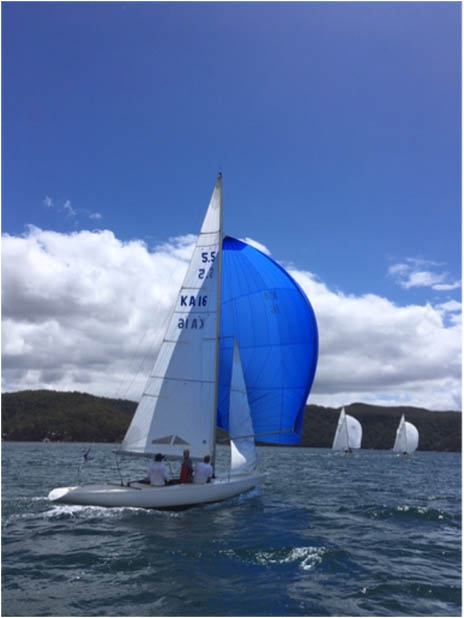 Sunday 25th February dawned with a 20-25 knot southerly the first day of the Australian Nationals also hosted by RPAYC. The Nationals have been reported in detail here: Report Australian 5.5m Nationals. Seven Fives raced for the championship. In addition to the boats above, the new Modern (post 1994) in Australia PlanB Redux, Rob Fielding and the beautiful wooden Marotte, Rob Hart joined the fleet. Both boats unfortunately were damaged in the high winds of the first day. Over the 3 days 3 different boats won the boat of the day (Antares, Skagerak and Baragoola) and 4 boats won at least one of the nine races (Tangalooma as well as the boats of the day). By the end of the series the first two boats Skagerak and Baragoola had equal points with Skagerak taking the Nationals on countback. Antares was 3rd four points behind the first two.

Skagerak was also the first Evolution (1970-1994) and Baragoola the first Classic (pre 1970). The only visitor, the beautifully restored Classic Pam from Sydney Harbour, appropriately and deservedly took the Handicap Prize. North Sails kindly provided enough prizes for every boat to take something home. 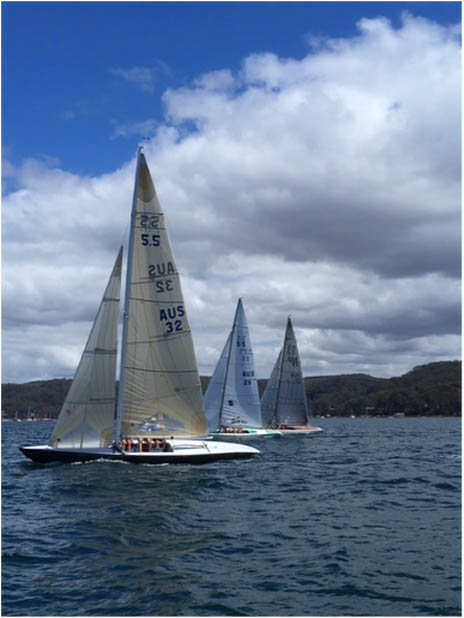 Wednesday 28th February was a fun twilight race for the Pittwater Alfreds Gold Cup (PAGC). A lovely sunny evening with a 10kts North Easter for an iconic fun pursuit race without spinnakers for 60 boats. The Woody Point Yacht Club holds a race every Wednesday evening in the summer months. The club's motto is "drinkers that have a sailing problem". It seemed a appropriate way to unwind after the rigours of the Nationals. Following the start an epic battle commenced between Skagerak and Antares. The boats never more than 3 boat lengths apart with Antares less than a boat length ahead in the dying breeze to finish 20th in the overall race, but most importantly the first Five and winner of the PAGC for the second year. Pam finished third and the crews retired to a local Italian restaurant for a drink, pizza and the prize giving. 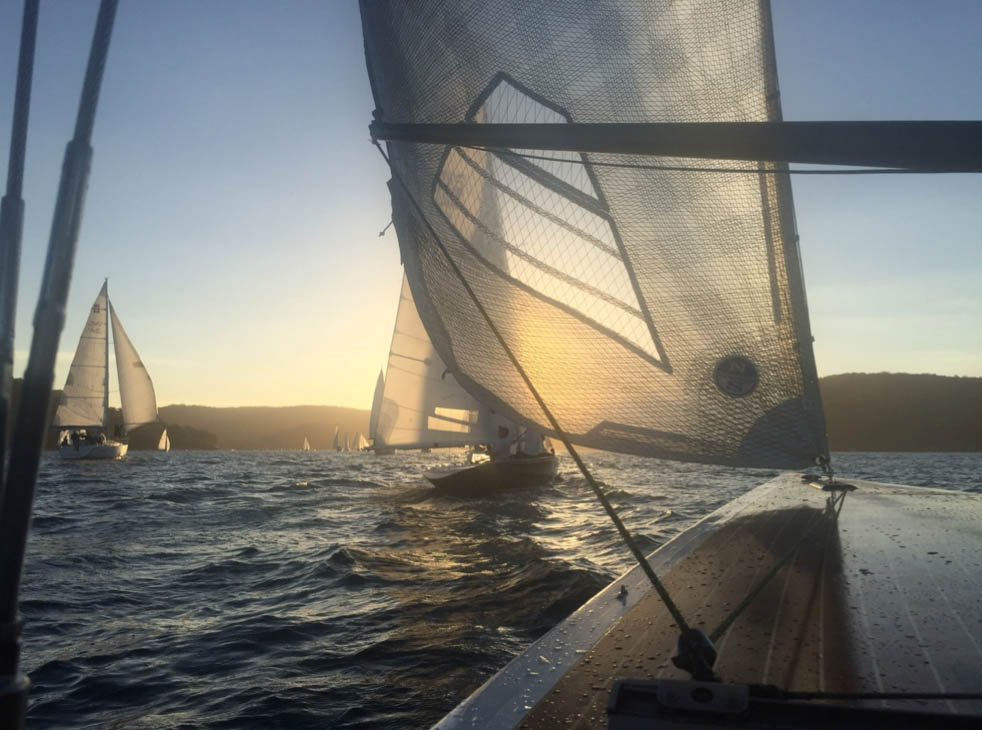 Thursday 1st March was another twilight race this time at RPAYC with the Fives mixing it with the diverse fleet of 14 boats in Division 3. This time Baragoola excelled and disappeared over the horizon in the light tricky conditions and finished the first Five by over 2 minutes and 2nd overall in the handicap. Once again Skagerak and Antares were locked together with many switches of position. Antares again just got ahead the finish again by less than a boat length, but Skagerak won the battle on handicap. 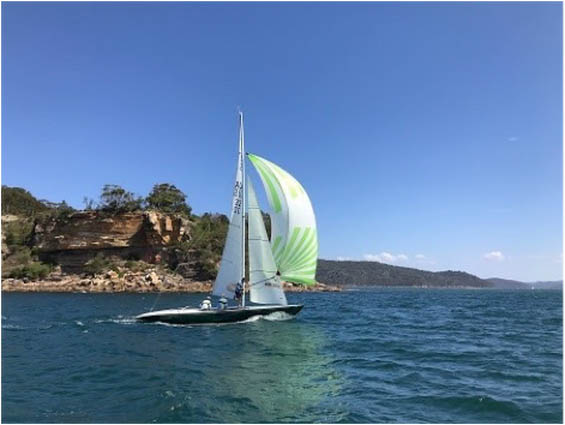 On the 7th day, Friday 2nd March, the Fives rested! 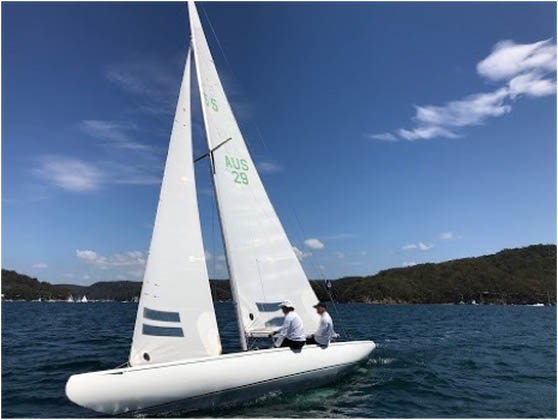 Antares decided to do the non-spinnaker division as they only had two crew with Damian Macey the crew and co-owner of Baragoola gallantly joining Martin Cross stepping in at the pointy end. Bob Stoddard and Mark Griffiths were joined by a new crew member Paul Hardy and with Pam opted for the spinnaker division. 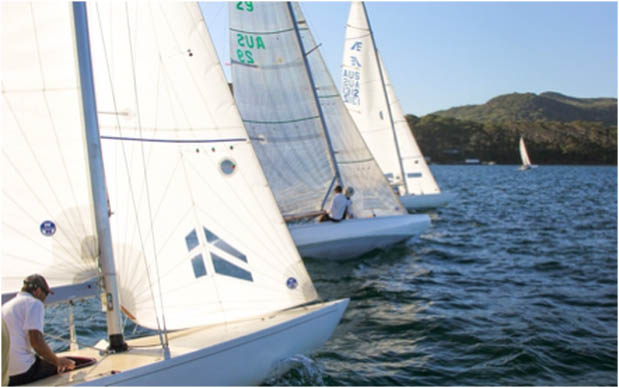 Saturday was classic Pittwater summers day with a gradually building North Easter and a course similar as the previous Saturday, up Pittwater and around Lion Island and back. Conditions were much more suited to the Fives and Antares had a ‘ripper’ and took the gun in the non-spinnaker division by 2 minutes from Love and War the S&S 47. Therefore not surprisingly won the handicap by nearly 12 minutes. Skagerak also had a ‘cracker’ finishing 2nd over the line only 10 minutes behind the 8m and also winning the handicap by 90 seconds. Pam took a creditable fourth beating the 8m on handicap. 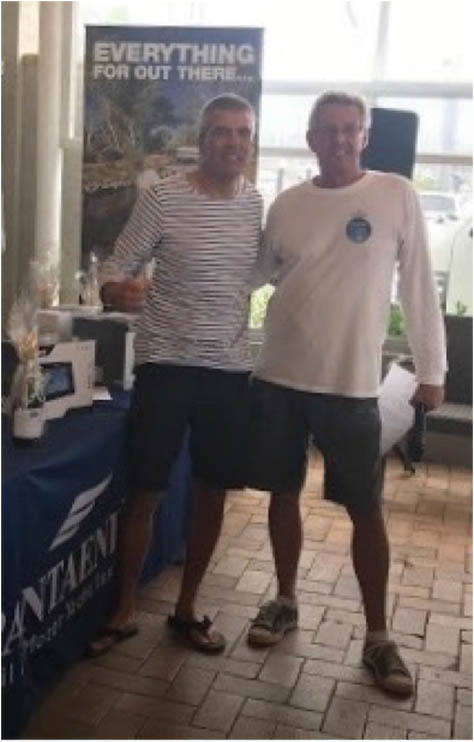 It is often said, it is alway good going into the last day of a regatta in the lead. And so it proved on Sunday when the weather deteriorated and the racing was abandoned for the day. The Antares crew were particularly pleased as their handicap had taken a real hammering after the first race win. 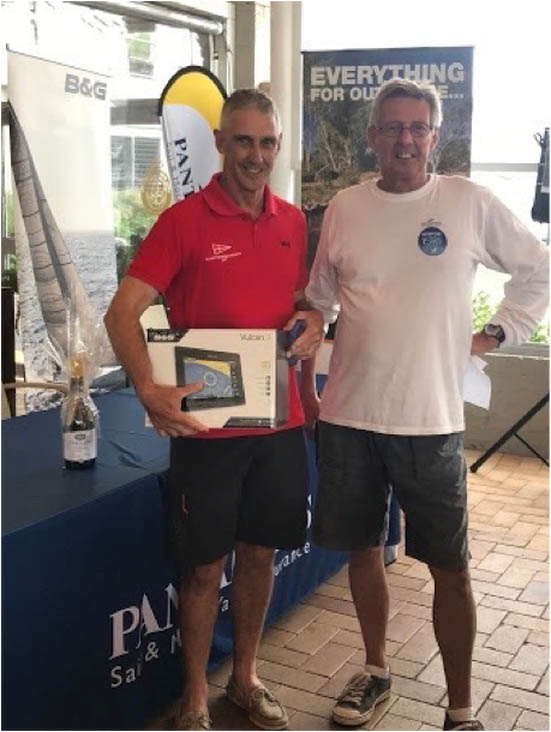 So appropriately Festival of Fives week ended with two Fives on the top of the podiums and both also winning a B&G Charter Plotter! They are both still trying to work out where to install them on the boats!!