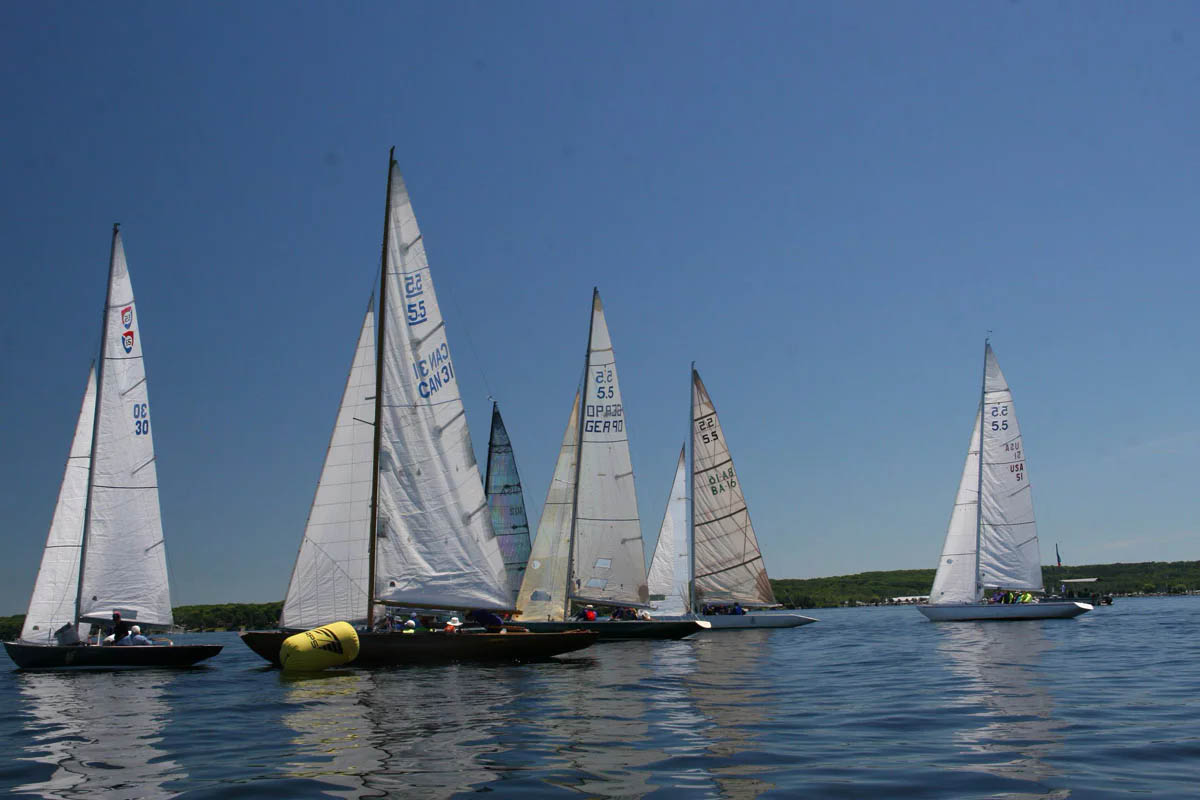 ​The North American 5.5 Regatta got underway Thursday under gorgeous sunny skies on Georgian Bay in Midland, Ontario, Canada. The day began with high anticipation, welcoming seven boats and crew members gathered from across the US and Canada.

Unfortunately those sunny skies brought light winds and forced a race committee decision to shorten the course. Skippers needed every strategy possible to squeeze any available advantage coming out of a tightly packed start.

USA 51 Purple Haze took the lead off the line and skipper Dan Rossi widened the gap for a comfortable margin for most of the race.

It looked like a sure thing, until CAN 22 Nantoria steadily inched up through the downwind leg. Skipper John Lister effectively positioned Nantoria to call buoy room, cut inside and take the lead on the last turn. They crossed the line one minute ahead of the American boat.

CAN 79 O’Kelly crossed in third in skipper Don Cameron’s first full season in his new boat.

Race 2 saw another bunched start with slack sails for most and Nantoria jumping out to an early lead with O’Kelly following her path.

Purple Haze appeared stalled at the start, but seeing the fleet slowing to the south made the tactical decision to take the higher north shore. Rossi picked up some errant winds to challenge for the lead at the pin and then opened a wide margin through the downwind leg.

Opting for no chute in the whispy winds, Nantoria slowly closed the distance and blanketed Purple Haze to steal any available wind.

However, winds began to pick up and Rossi took full advantage to take the win on the upwind sprint to the finish for a 37 second lead over Nantoria.CAN 30 Jill, skippered by Harley Armstrong, sailed to a strong finish just under a minute later.

Those winds kept building for Race 3 resulting in a pushy start and everyone over the line within a few seconds.

Purple Haze pulled away with another strong start closely followed by Jill on her stern taking the southern line.

Nantoria had packed her patience and kept her spinnaker packed all day, waiting to unleash it for the first time in the third race. Timing was everything and she cruised to a finish 1:22 ahead of Purple Haze. O’Kelly took third again.

While the early leaders have laid down the challenge there is still plenty of opportunity to come with racing continuing through until Sunday.

Although competition brings sailors together, the Nor-Am 5.5 also puts a heavy focus on friendship, food and fun with social events each evening bringing together family and friends of the racing crews. Many crews are billeted with local hosts ensuring a tight-knit social side of this growing regatta. 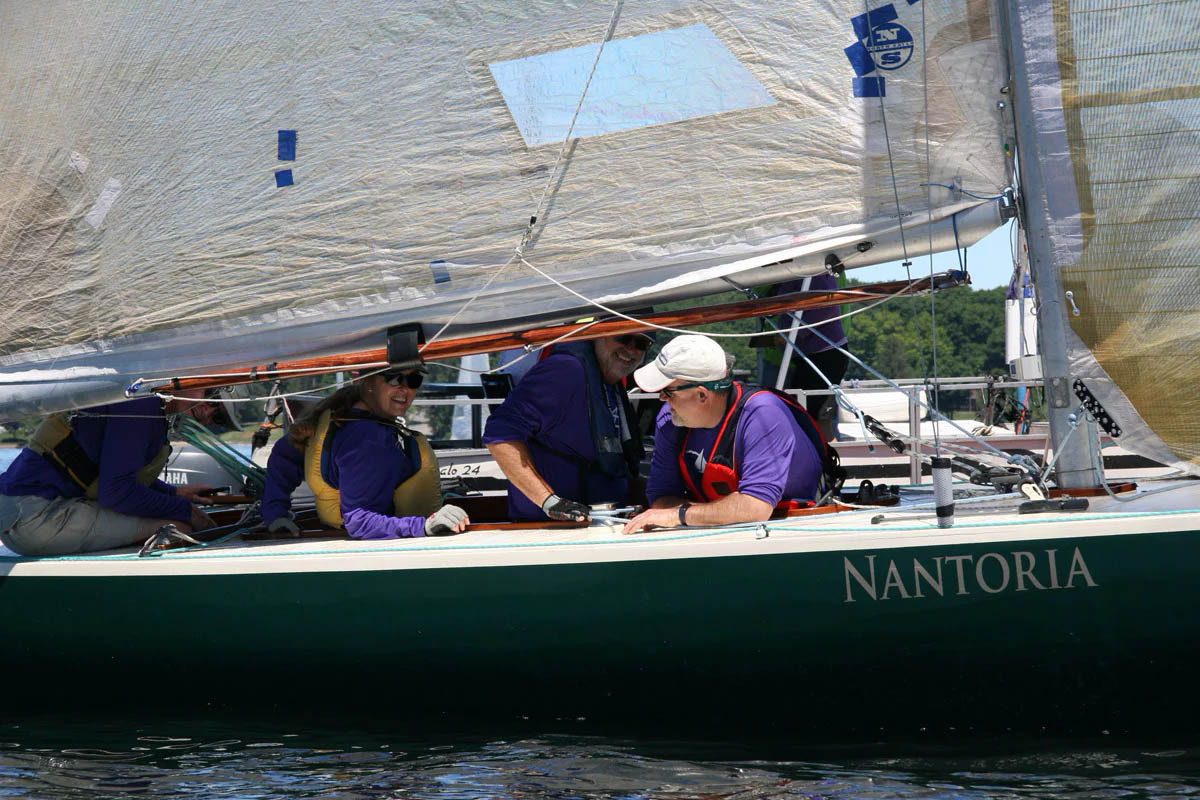 It was all smiles for CAN 22 Nantoria (John Lister, Susan French, Bill Mills and Dave Harker) after Day 1 of racing at the North American 5.5 Regatta with two first place finishes and a second. 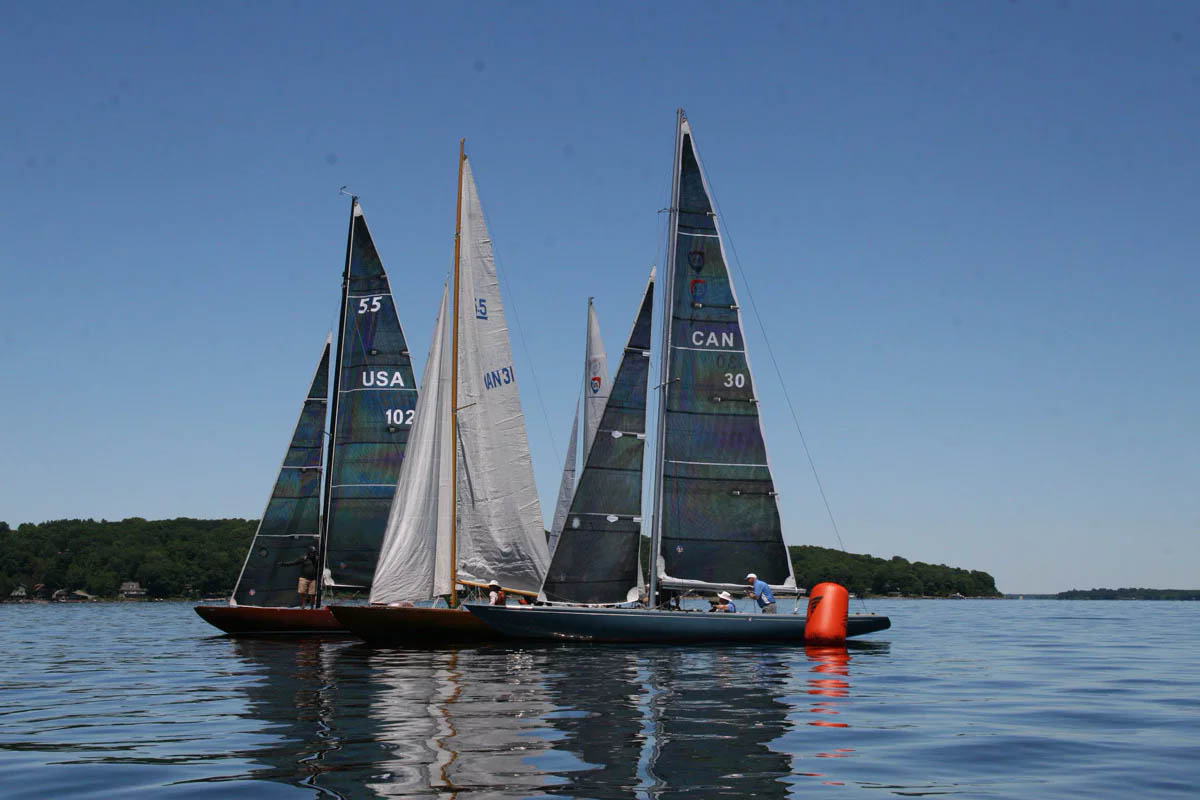 Sunny blue skies delivered extremely light winds for the first day of racing in the North American 5.5 Regatta which saw slack sails and a tightly bunched fleet through most of the three races.