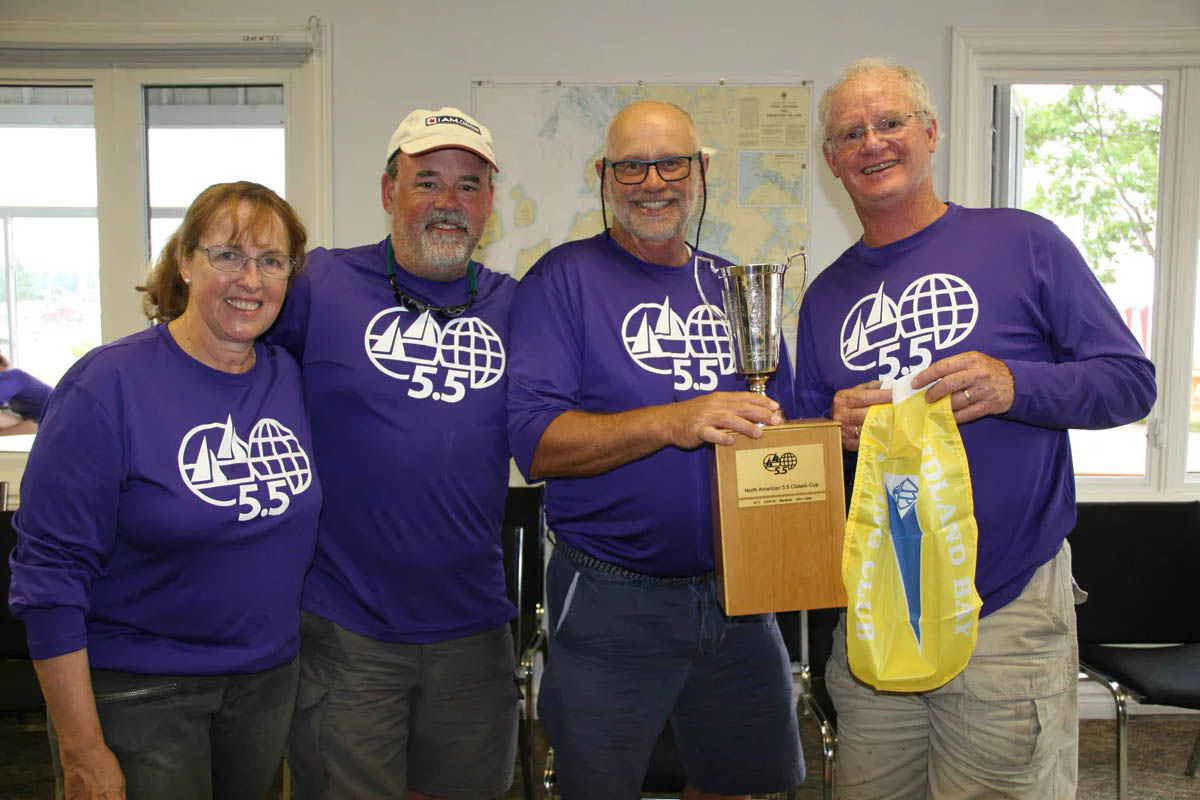 After 10 races over four days CAN 22 Nantoria (Susan French, Dave Harker, Bill Mills and skipper John Lister) was the clear winner of the 2018 North American 5.5 Regatta in Midland, Ontario, Canada.

A tight-knit fleet welcomed CAN 31 Summer School back to the race course on the last day of racing in the North American 5.5 Regatta on Sunday. Bruised but not broken her team turned in a strong Race 1 registering a second place finish in an exciting day of competition.

Matt Thurley and Jeff Brook shared helmsman duty throughout the regatta. Skippering Summer School for the day’s first race Thurley said, “The boat was moving very well today which was so nice to see after the crash incident yesterday so coming out and getting a second place in the first race was really heartwarming.”

Jeff Brook added, “Summer School might be bruised by she’s still fast and we had a dream team on the boat with Matt, Cheryl Keith and Rachel Thurley. I look forward to sailing with them again.”

CAN 22 Nantoria had thrown down the gauntlet to USA 51 Purple Haze throughout the week and were battling it out till the last day.

The first race saw a scrambled start that had three boats called back for crossing early. CAN 30 Jill was late to the line but by avoiding the penalty circles got out to a lovely start in a clear south path.

But it was Summer School who was first to the windward mark with Nantoria answering the challenge close behind. Executing some nice transitions C 5.5 30 Summer and CAN 79 O’Kelly came to the turn together in a battle for third.

The downwind leg saw Nantoria trade in for the lead with Summer School staying a close second. The course allowed plenty of room for tactics and strategy as skippers combed the bay for every advantage.

The fleet spread out through the second downwind leg and it was clear it was to be Nantoria’s race (and regatta) but every other position was up for grabs. Summer School would cross in second to loud cheers from the fleet after yesterday’s collision sent her in for assessment and repairs. It was excellent to see her moving so well throughout the day.

The pre-race dance for best position was artfully executed for a clean start in Race 2. Nantoria was fast off the line and gained the lead quickly and she would never give it up. The race for second was tight and there were four lead changes throughout the race between O’Kelly and Purple Haze. O’Kelly’s Don Cameron would prevail, breaking out of his string of third place finishes to register a second, followed by Purple Haze in third and Summer School turning in another strong performance to cross in fourth.

Cameron called the North American 5.5 Regatta a fantastic experience and tons of fun for his family who filled out his crew. “We’ll be back up for the fall regatta. Midland is such a terrific place to sail out of. I’ve done yacht deliveries to Florida and so many other places and this is one of the nicest places anywhere. Sailing on the bay is just marvelous. The 5.5s are great to sail, so responsive and really enjoyable.”

Co-operative weather and a flexible race committee meant sailors got in 10 races over the four days. For the second year in a row Nantoria (skippered by John Lister with crew Susan French, Dave Harker and Bill Mills) will have her name on the silver trophy generously donated by Thies Forst.

All skippers and boat owners hope to continue to grow the North American 5.5 fleet. For information in Canada contact John Lister and in the USA contact .

Sharp transitions and exceptional team work propelled CAN 31 Summer School to a second place finish in Race 1 on Day 4. She crossed the line amidst cheers from fellow crews after a collision forced her to withdraw from Day 3 racing.

Each June the growing fleet of 5.5s in North America welcomes new racers and owners for four days of friendship and fun with competition on the water followed by camaraderie on shore.