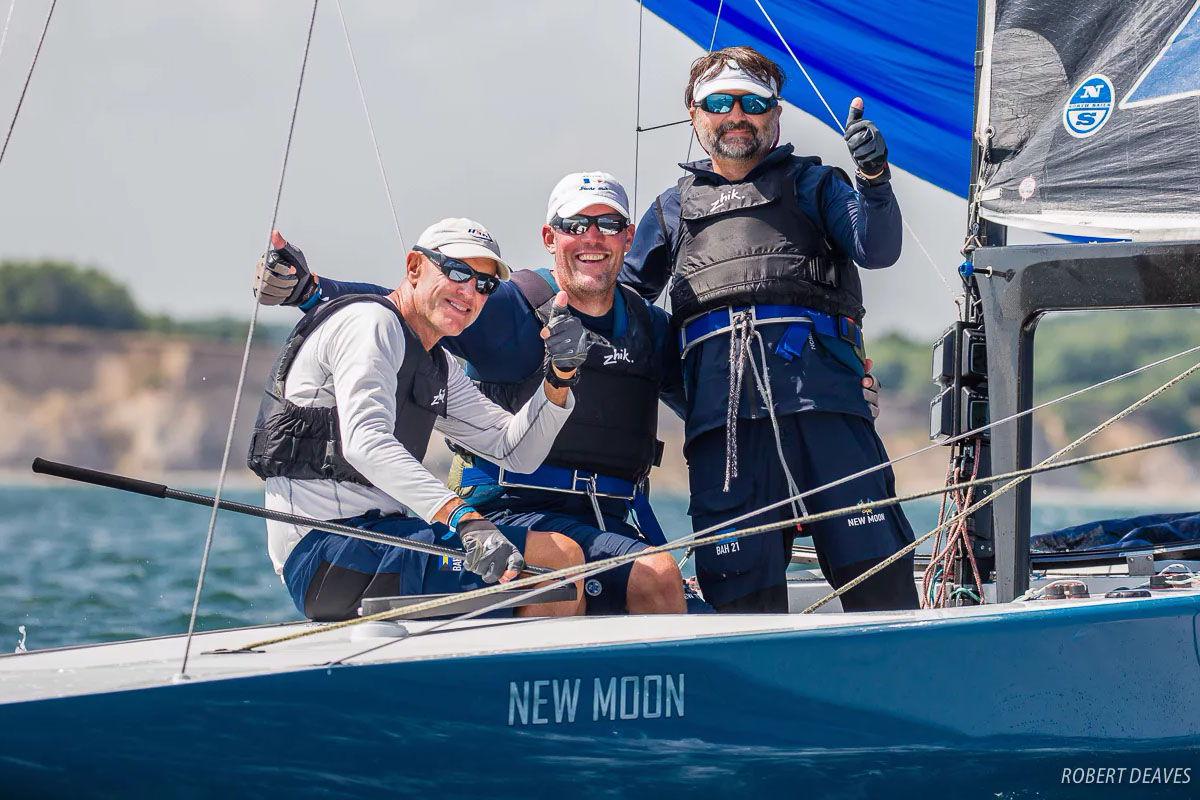 While most of the world has been talking about a blood moon, in Travemünde, New Moon has been dominating the headlines. Just two races were needed for New Moon BAH 21 (Mark Holowesko, Christoph Burger, Peter Vlasov) to secure the overall win at the 5.5 Metre German Dutch Open. Two race wins put it beyond doubt.

The wind had shifted more towards the south-west, and, coming off the land was more shifty than the previous days. It gradually built from 6-7 knots to 14-16 by the last race, though the water remained quite flat. Severe storms were forecast for later in the day, but these didn’t show up until the time of the prizegiving, which was hastily relocated inside as strong gusts bringing torrential rain tore down the Trave. 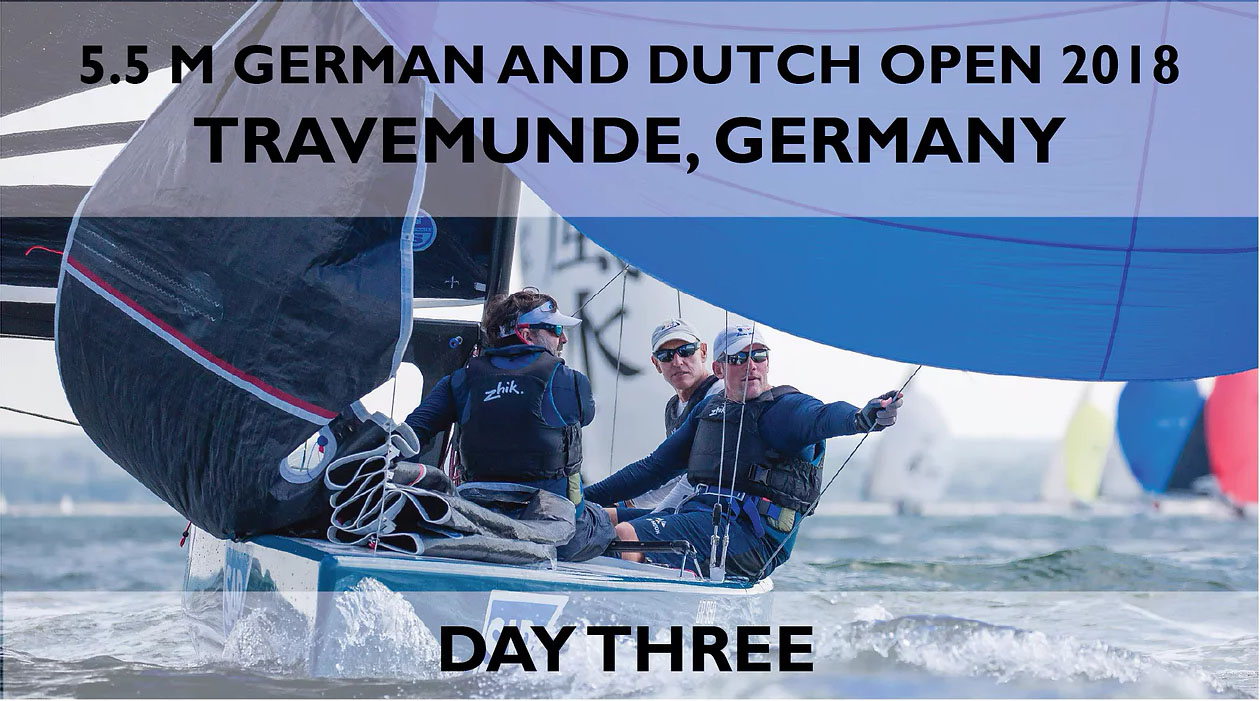 Several boats missed the change to the first start time to avoid the incoming storms, including Marie-Françoise XIX SUI 228 (Jürg Menzi, Jürgen Eiermann, Christof Wilke), which paid a heavy penalty as they already had one letter score and could no longer make the top three.

This left New Moon to win the first race of the day, though they were pushed hard all the way by Feng Shui. On the final downwind, Duchess of B NED 31 (Victorine Bredero, Wiebe De Witte, Nick Spaans) and Silverfox GER 83 (Michael Schulz, Joerg Gruenwald, Jens-Magnus Bothe) closed right up for a scramble for the line, all boats crossing within seconds.

New Moon then put the overall win beyond doubt in the second race leading from start to finish. Marie-Françoise XIX was back in the game and the two boats fought for supremacy round the three lap course, never more than 4-5 boatlenghs between them. But New Moon sailed the better race and crossed the line first again to take the championship with a race to spare. Feng Shuicrossed third and was up to second overall.

With New Moon heading back to the harbour for an early crane out, Duchess of B led most of the way in the final race only to drop their spinnaker in the water right at the end and watch helpless as Marie-Françoise XIX sailed through for the race win. Feng Shui also pulled out after experiencing numerous problems including a multiple wrapped jib halyard. Maitresse Gaat Vreemd picked up her only top three of the day to follow them home and take second overall.

Peter Vlasov, front man on New Moon, said, “The racing went well today. We won the first two so we didn’t have to race for the crane, so we skipped the third race which was a big luxury and went straight for the crane.”

He spoke for all the sailors when he added, “It has been a fantastic few days of racing. Travemünde showed its best side. Thank you very much to the organisers for a wonderful event, beautiful weather, fantastic wind conditions, good race committee, and very good organization. It was joy to be here. A long drive for us but worth every bit of it.”

Looking ahead to the upcoming world championship, “This event gives us good confidence for the upcoming world championship, in a few weeks. You know the old saying the more time you spend on the water the better you get, and I have noticed over the last two days, especially today, we are getting so routined on our team that we can swap jobs. We have times when Christoph and I alter our jobs and it doesn’t mess us up, it doesn’t slow us down. It’s very fluid on our boat and I think that’s due to the fact that we spend a lot of time practicing and going to these events.” 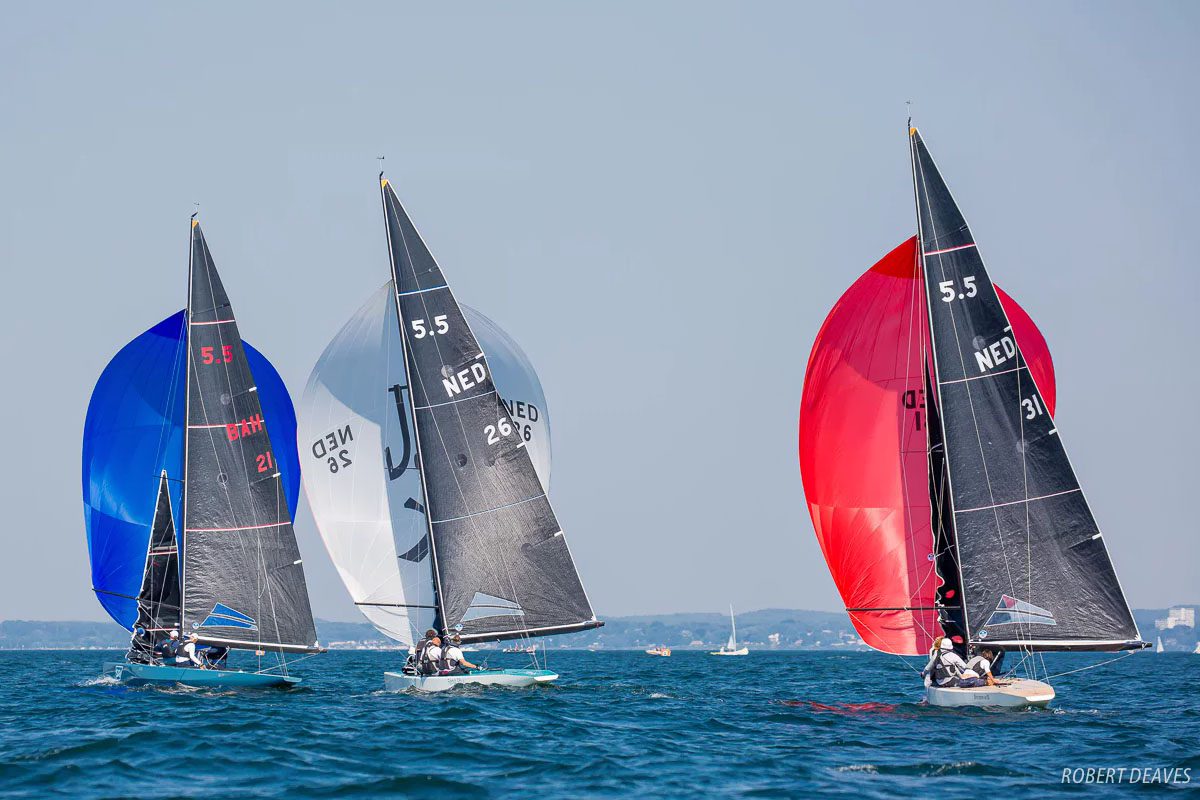 The sailors now only have a few weeks to prepare foe the major event of the season, the cup races and the world championship in Cowes. Vlasov offered an invitation to all 5.5 Metre sailors who had not entered yet.

“Last but not least I’d like to share my enthusiasm for the upcoming world championship in Cowes on the Isle of Wight. I’d like to invite everybody, especially the ones who haven’t quite made up their mind. You must come to this event. We are true guests of the Royal Yacht Squadron and I think that’s a lifetime opportunity that none of us should miss out on. I see the social programme is absolutely perfect and I am sure it will impress us all once we get there. So get your boats ready and let’s all come to Cowes.”

The 2018 World Championship runs from 18-24 August, and is preceded by the 5.5 Metre class cups including the prestigious and historic Scandinavian Gold Cup from 14-19 August.