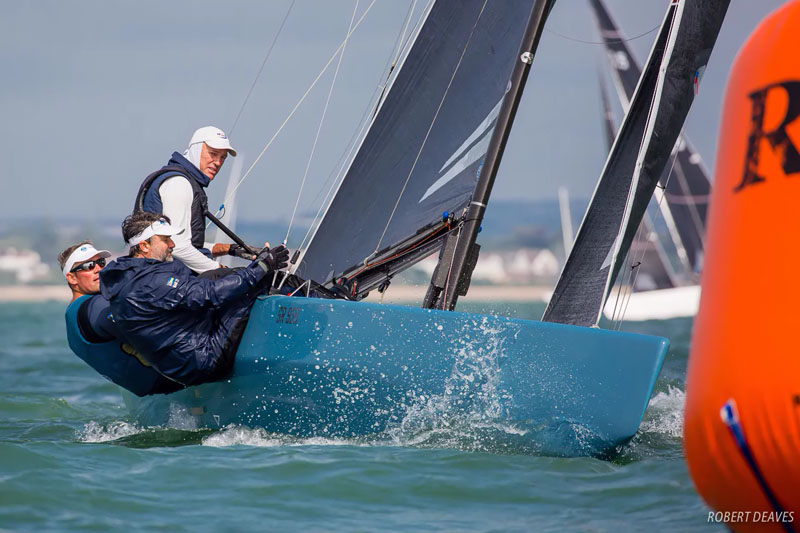 Nearly, seventy years ago the first 5.5 Metre was launched in the Solent by Charles E Nicholson of the famous Camper & Nicholson yard. On the same waters today, 25 International 5.5 Metres, from ten nations, most looking very different from that first boat, began competing in the 56th world championship of the class, which is celebrating its 70th anniversary in 2018. The Rule that governs how a 5.5 Metre is designed, was written in 1948 and the first boat,The Deb K-1, was designed in 1948 by Nicholson. That boat was first sailed in the Solent in 1949. 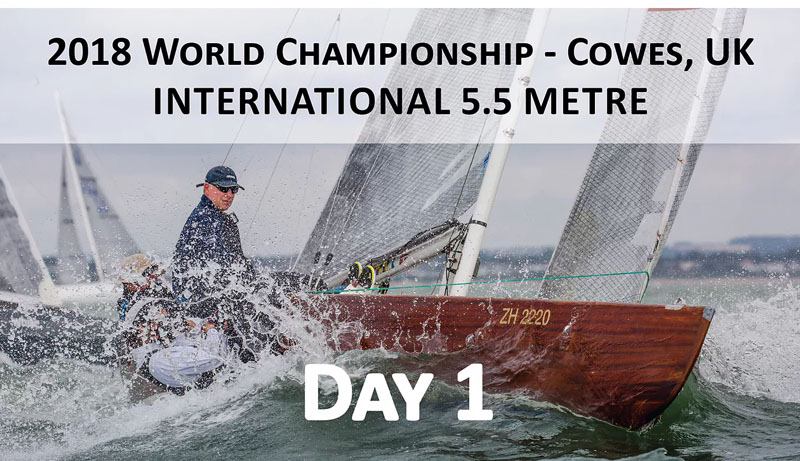 Video: Highlights from Day 1 of the World Championship

The day brought a range of English weather with early morning rain and light winds that changed through the afternoon to briefly bring moderate south-westerlies and some broken sunshine. It was a gentle start to what is expected to be a fiercely competitive week of racing.

After a slight delay caused by a wind change, the committee boat end proved very popular, with a crowd piling in at the gun. Beating against a flood tide, decisions over the current provided decisive and were quite varied.

New Moon started near the pin end on a lift and controlled the shifts perfectly on the left to lead that side up the first beat. Those who opted for the right side, came in a bit behind, but all the favourites were in the front group. New Moonquickly opened up a nice gap behind and then the interest was in the chasing group of John B, Artermis XIV and Marie-Françoise XIX. 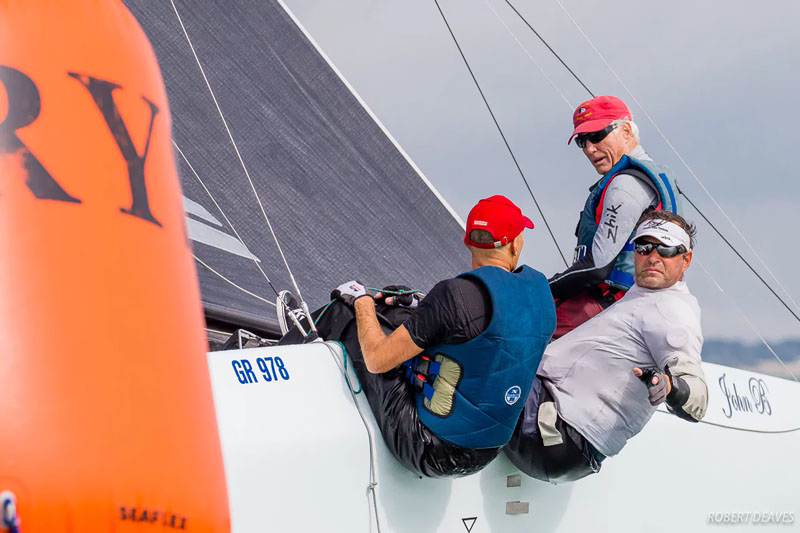 John B was, for a while, clear second and rounded every mark in second place. However after rounding the top marka bout sixth, Artemis XIV, closed up on the third beat and the final downwind, to be within striking distance on the final upwind. Their decision to tack under the layline to the finish paid off as they took the final shift back and crossed ahead of John B by no more than two boatlengths.

Mark Holowesko of New Moon explained his race, “There was a bit a of jam at the start. We were going to start at the committee boat but there really wasn’t any room there. Then right at the start we felt there was a big lift on starboard, and we had a good line and lift of the start. It seemed everyone wanted to go right for the current but there was such a lift so we just played the shifts going up the course, rather than trying to get to what people thought was the favoured side. We had had pretty good boat speed and didn’t didn’t do anything stupid.”

On a close 1, 2 for the Bahamas boats, “Kristian is just super fast and he was charging the whole time. He caught up with Gavin on the third run and outsailed them towards the end.”

After finishing as runner-up to John B in 2017, New Moon is again one of the favourites this year, but perhaps with something to prove. He said a good start is important.

“It’s just comfortable to get a good race under your belt on the first race and stay out of trouble. That’s what we tried to do. The idea today was not to be super aggressive but just find a clean space to get off the line with speed, play the shifts, and that worked really well for us.”

On sailing in Cowes, “The current and the wind are a real challenge for those of us that have not sailed in such strong current before, so we befitted a lot being here the last five days sailing in a lot of different winds and current. But it took three to four days to get used to the current and the wind changes throughout the course. It’s a beautiful place to sail, very difficult but very beautiful.” 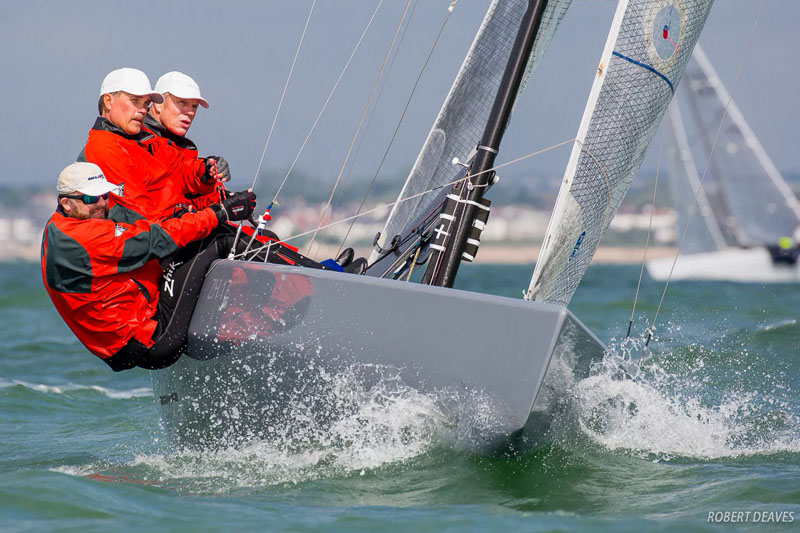 Mathias Dahlman, from John B, said, “Today we were working all the time on the left upwind and the middle downwind. We started at pin and worked up from that point. We rounded all the marks second, but finished third, so we were just beaten by Kristian Nergaarrd, but it was a close one. Our speed felt OK, so it is going to be interesting worlds this year.”

On the fleet, “It is very competitive. [Jurg] Menzi was doing very well on the upwinds today, and super fast. And those around us were going fast. It’s going to be a long regatta and a lot will happen due to the current and wind.”

On sailing a 5.5.”It’s one of the best boats. Upwind in a 5.5 is a real pleasure. It's hard work but I enjoy it a lot, downwinds also. It’s a very nice boat to sail. It’s also very up to date with all the new technology with sails and fittings and I think most of the boats are about the same nowadays, so it’s up to the sailors about who is going to win.”

On the rest of his crew, “Sailing with Gavin is a pleasure. He is so kind and an excellent skipper. He steers the boat very well and to sail with Lars is really good. I am really lucky to be on board with them.”

John B is defending the title this year, “It’s a new regatta so I don’t think of it. Just race hard, do our best and see where we end up. Defending or not makes no difference.”

Racing continues on Tuesday. The world championship consists of nine races, with two more races scheduled each day from Tuesday to Friday from 11.00.

Full image galleries (free for editorial use) for each day can be found here: www.flickr.com/photos/fivepointfivemetre/

Technology permitting there will also be limited live coverage and updates on the class Facebook page: www.facebook.com/5.5Class/