New Moon rises to the challenge to clinch 5.5 Metre world title in Cowes 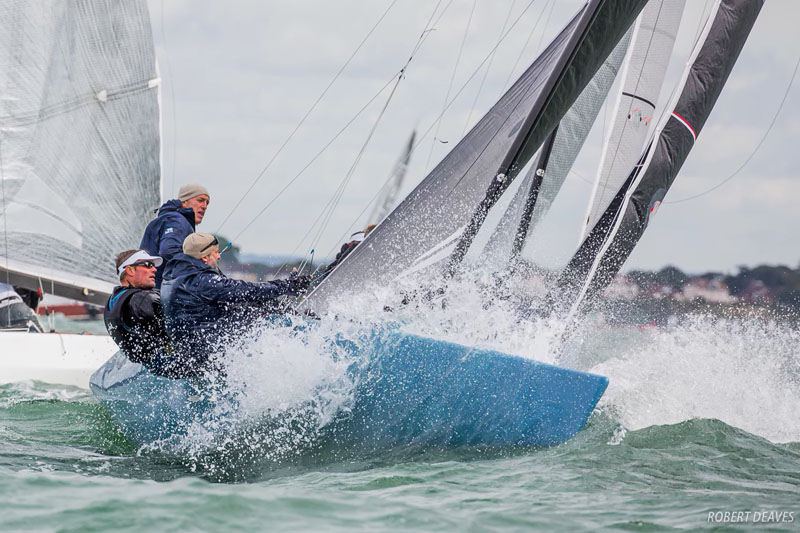 The final day of the regatta began with sunshine and wind, but later gave way to several fronts rain and occasional strong winds. Nevertheless it was a fitting end to a great and very competitive championship. It was very tight at the top with five boats clear ahead of the rest of the fleet and all looking for that elusive world title. Three of them had won before but two were in the hunt for their first title.

However, New Moon put it beyond doubt in Race 8 leading almost from start to finish to take their fourth race win of the week and clinch their first world title with a race to spare. The strong ebb tide made the left side the only place to be and the never looked in danger, being briefly passed by Caracole, SUI 214, (Bernard Haissly, N. Berthoud, Daniel Stampfli) on the second downwind. With all the other main contenders far enough behind, New Moon had enough of a points advantage to secure the title there and then.

The other podiums positions were still wide open though. After beginning the day in fifth overall, Artemis XIV put the pedal to the floor in the final race, dominating the left side and after rounding the top mark behind Clark Kent, NOR 64, (Petter Fjeld, Peter Hauff, Christen Horn Johannessen) moved ahead and controlled the tricky race, with more dark clouds coming down and another front arriving just after the finish. It was enough to move them up to third, while a fourth and tenth places left Marie-Françoise XIX in second overall.After a poor start, New Moon, showed why she is world champion, pulling through tefleet on each leg to cross in fourth.

The week’s early leader, John B, BAH 22, (Gavin McKinney, Lars Horn-Johannessen, Mathias Dahlman), struggled all day and a tenth and a 14th was to high a price to remain on the podium and they dropped to fifth, while an eleventh and seventh kept Black & White in fourth.

He paid tribute to his crew, “These guys are really fantastic. I am really proud to sail with these guys. They do so much on and off the boat, and in between races. Very professional but also its an incredible amount of fun. We’ve always enjoyed ourselves sailing together. These guys dragged me into this class and drag me around the race course. It’s just been a blast.”

Front man Vlasov could not quite believe it. “We are world champions. That’s a big thing. Winning the 2018 world championship in Cowes is an incredibly wonderful thing to have happened to us, because it is Cowes. I have been in the class for almost 20 years now and I have come close a couple of times. To win it and win it here and also know that next year for the 100th anniversary of the Scandinavian Gold Cup, we get to sail and represent The Bahamas, and sail the Gold Cup in Helsinki, where it originated so it’s very, very exciting times for us in New Moon.”

Burger said, “This whole week was so incredibly close and you would have to get all the mental, all the current, a bit off what you would expect and have one upwind that didn’t turn out the way you expect and the whole mindset and confidence can change so rapidly.”

He said their preparation and confidence was the key to their success this week. “We got our act together, we took the right decisions before the regatta, started to prepare, came here early to learn about the place. We had superb boat speed. We had strong confidence towards the end of the series and we pulled it off so that was more than satisfying for everyone.”

The International 5.5 Metre fleet has immensely enjoyed its two weeks in Cowes. The Royal Yacht Squadron has been the perfect host for the class, a class that started its long story on these waters nearly 70 years ago. It had been 20 years since the fleet last came to Cowes.

Next year’s world championship heads to Nyländska Jaktklubben (NJK) in Helsinki, which is where the class and the club will celebrate the centenary of the Scandinavian Gold Cup, which has been sailed for by the 5.5 Metres since 1953.

Full results for all events can be found here: https://www.rys.org.uk/regattas/5-5m-worlds/

Final results from the world championship are here: https://www.rys.org.uk/assets/WC-Provisional-Results-Overall-1.pdf

Full image galleries (free for editorial use) for each day can be found here: https://www.flickr.com/photos/fivepointfivemetre/