Capricious wind continues on Day 2 at Herbstpreis on Lake Thun 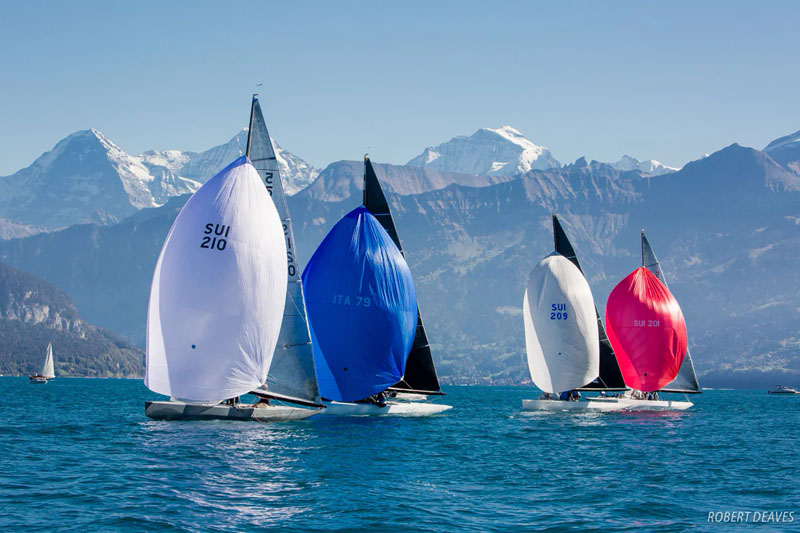 Saturday was almost a carbon copy of Friday at the Herbstpreis on Lake Thun in Switzerland, with the capricious wind only allowing one more very light wind race before disappearing back into the Alps. In taking the race win, Marie-Françoise XIX, SUI 228 (Jürg Menzi, Dino Fumasoli, Christof Wilke) also takes the overall led with just one day left.

The fleet gathered at Thunersee YC at 08.00 hoping for wind. The extremely light wind developed into a flat calm and the sailors spent the morning, chatting, drinking coffee and getting over the night before, which despite the very early start had, for some stalwarts, nearly overlapped with the start of racing.

Finally just after midday a light easterly developed and the fleet was released for a 14.00 start in 4-5 knots. Marie-Françoise XIX made the best of the first upwind to round ahead of Caracole, SUI 214 (Bernard Haissly, Daniel Stampfli, Nicolas Berthoud) and Shaolin, SUI 226 (Andreas Kindlimann, Martin Huber, Jürgen Eiermann).

Then the wind dropped, the died and the lake became a mirror.

Front man on Marie-Françoise XIX, Christof Wilke, explained their day. “It was another hard day waiting for wind and finally we got one race. We had a very good start and could control the fleet a little bit. It was quite a soft and light wind race like yesterday.”

On the downwind, “It was the same situation, looking for pressure and the best angle and we finally, also through the middle, we found the best way and the shortest way.”

Best known as being the main builder on 5.5 Meters over the past few years, he has been sailing the boats for 25 years. “It started by accident. I sailed a boat with my friend in Cannes for the first time and we felt it was a really nice boat and I was really keen to build one of them. So we built one for myself and started to sail with it, pretty successfully and then we got some more orders, and now we have built something like 32 boats and the owners are pretty happy.”

“The boats are really nice to sail, especially in windy condition; exactly what we didn’t have here today. They are also very easy for singlehanded sailing with a self-tacking jib and a very well balanced boat, especially upwind. To me it is one of the best keelboats to sail on lakes and also offshore.”

Mariachristina Rapisardi is one of two lady helms here this weekend. She is sailing 5Billy5. Despite only sailing 5.5 Metres for four years, she is enamored with the class.

On today’s racing, “It’s fantastic, not so much wind, but still fantastic. Yesterday was better for us, but today could be worse because had had some confusion during a maneuver but very nice. We like Thun a lot.”

“I only started racing and sailing a 5.5 four years ago, I am not a racer. I bought a Classic boat and did a regatta and I won. So I decided to carry on. I bought a Modern as well so now I have a Classic and a Modern. I was not a racer, never sailed a 5.5 before and I started winning, and now I want to go up and learn more every day.”

She is passionate about growing the class and getting people sailing. “In Italy we are trying to push the class and probably next year we will hope to have a new Evolution being sailed.” There are a number of Classic hulls being sailed in Italy, but, “The Classic is not so much fun as sailing a Modern. There is much more adrenaline, the boats are faster, more boats and a lot of people together.” 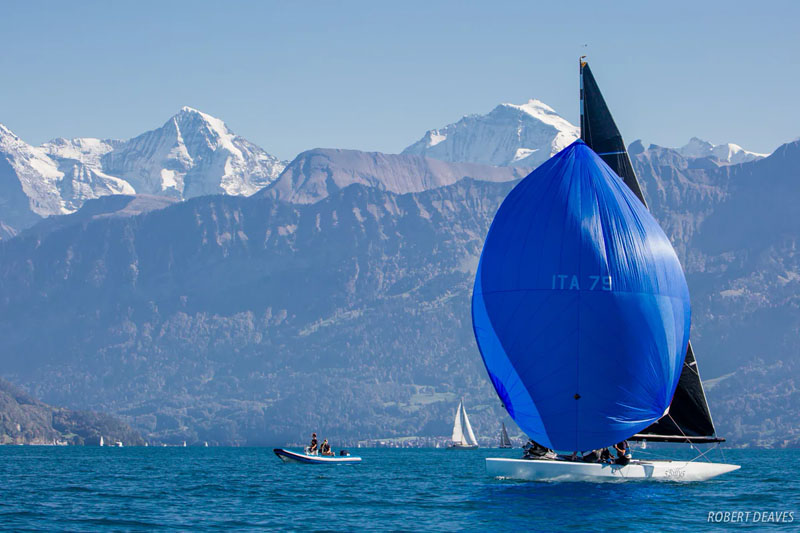 After Saturday’s early gathering at the club benefitted no one but the coffee shop, the race committee decided to try the same tactic on Sunday, hoping the early morning wind will allow them to get some races in, so wind permitting, racing will resume and conclude on Sunday from 0800.