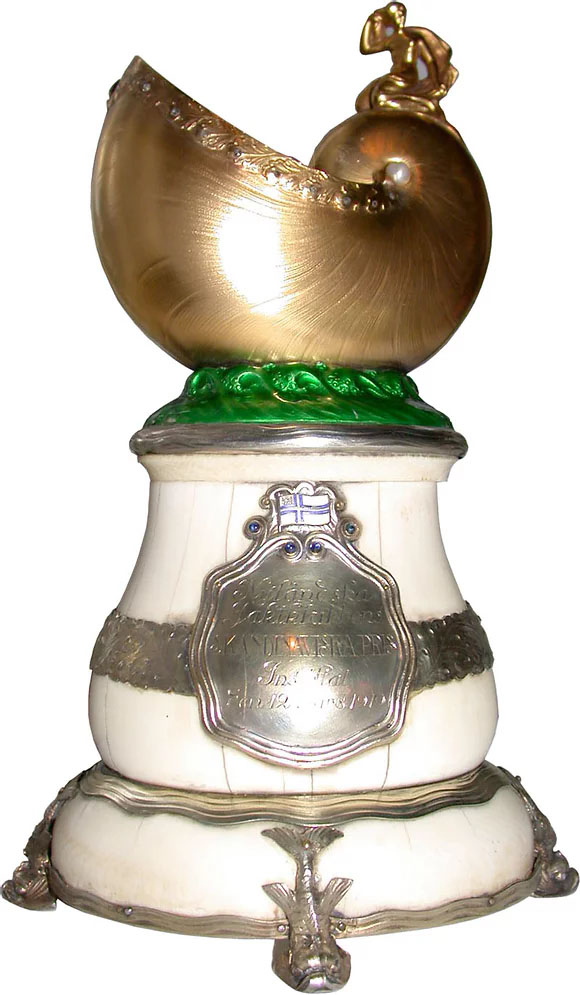 The birth of the Scandinavian Gold Cup

The Gold Cup was instituted 1919

The first yacht clubs were born in Finland halfway through the 1800s, and sailboat racing was spread gradually to Finland and boats by Finnish and foreign known designers were built for homeland and foreign use mainly in Scandinavian yachting. But then the first world war interrupted the international yachting for several years.

1917 Finland became independent and the young nation could first time take part in international yachting as a nation. 1919 spring the Nyländska Jaktklubben in Helsinki decided to create a trophy for Scandinavian sailboat racing. NJK ordered the trophy from a well known Swedish royal goldsmith C. G. Hallberg in Stockholm. The trophy was designed by Jean J. Jahnsson and modelled by sculptor Alfred Olsson. The trophy was named later the Scandinavian Gold Cup and has later been acknowlished as a valuable trophy. 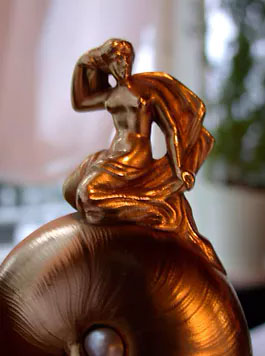 The materials and parts
The Cup, seashell, and the girl (virgin) is solid gold, with 17 small diamonds and two pearls. The seashell is on the green water (coloured enamel). The base is of ivory partly covered with solid silver. The base includes also the miniature Njk flag in blue and white enamel. Also included are four blue coloured small pearls. The base is supported by four legs wich have a shape of fish, the poor fishes are upside down on their necks. The size is very small but the weight is considerable because of the solid materials.

The symbols
The whole piece of art, the sculpture, symbolises and celebrates the independent (1917) Finland and the flag of that nation.

The golden "Virgin Finland", the free Finnish woman, rides on a seashell on the waves of the Baltic sea.

On the silver plate is written:

The trophy celebrates also the yacht club flags in Finland, which is quite unique in the sailing world. The yacht club flags had been taken into use already during the autonomic era. Independent Finland got new blue cross flag 1917 but 1919 the yacht clubs started to use blue crossed flags with a white cross on the blue one and in the flag pole side upper corner was the symbol of the club. All Finnish yachts could then use this flag as another national flag in the yachts.

In handling over this trophy to the Scandinavian YRU the Nyländska jaktklubben wishes to promote the intercourse with the Nations of the world on the basis of friendly competition in the most noble of sports.

May this gift of our club prove a mighty promotor of international yacht racing and be a means of tying together real yachtsmen all over the world.

International prize 1922
First races for the Scandinavian Prize were sailed between Finland and Sweden in the skerry cruisers 40 sqm class 1919 an 1921. Sweden won the first and Finland the second.

According to the Deed of Gift the competition for the cup was meant for a class of the IYRU measurement rule. IYRU had chosen new international keelboat classes at the conference 1919.

The IYRU classes were 6m, 7m, 8m, 9m 10m, 12m of revised 2ndInternational Rule and also still 1strule classes 6, 7, 8, 9, 10 and 12 (larger were dropped). Other classes were the French 6.5m & 8.5m and the Nordic SK30 & 40 skerrycruisers. The same 16 keelboat classes were also the events of the 1920 Olympics yachting 8.5m or 9m were not present. The olympic yachting 1920 is the most weird of all games and instead of competition it was a kind of IYRU floating boat show. Classes from the two International Rules were separated, some with only one entry or nothing. There was only two 6-metres from he 2ndint. rule. Classes 8-, 10- and 12-metres had only one entry in their events. The first world war had interrupted all yachting in Europe and still in 1920 international yachting was a question, still in chaos, what it should be and only about to begin. In those days almost every year came up a new keelboat class. Only Norway had kept building racing sailboats in Europe during the war and was one leading nation in yachting and it was seen also in the future gold cup racing. North America had their own mainly Universal Rule classes, 'R-boats', 'Q-boats', 'J-boats', and the America’s Cup. They came to Europe as late as 1926.

Elsewhere the French had speculated and changed the One Ton Cup (1899 for One-tonners, 1907-13, 23-39, 46-62 6m) from 6 metres to the new Olympic 6.5m class 1920-23 to get popularity but soon later changed back to 6m. But now 6 metres would need something in turn. The French classes were not popular at all in Scandinavia and the SK classes were not spread enough to international yachting. So the cup-class was to be the smallest and cheapest class, the 6-metres from the 2ndInternational Rule, chosen from the IYRU measurement rules. The newly revised 6-metres started to spread gradually into international yachting first in Europe, later in North America and the interest to the new Gold Cup started to grow.

The Scandinavian Gold Cup would then be a challenge cup and only one boat per nation could participate. The boats should represent recognized yacht clubs. The boat, which first wins three races wins the cup and only winners of the first three races could continue to the final races. The maximum of races should then be seven if three winners emerged. Other regulations told that the yacht should be designed and built in the challenging country until 1961.

In yachting the Scandinavian Gold Cup became a well known international trophy for the corinthian sailors world wide. Only amateurs were allowed (until 2011). The 6 metres raced for the Cup only 24 times until 1952. 1949 IYRU:n accepted the new 4th ie 5.5 metre international measurement rule, which replaced the 3rd internationnal measurement rule and 1953 the Cup was changed to a more affordable and more developed modern class, the Five-point-five metres and this year 2019, 66th time, the 92nd Scandinavian Gold Cup will be sailed in Helsinki to celebrate the 100th Anniversary of the Prize.