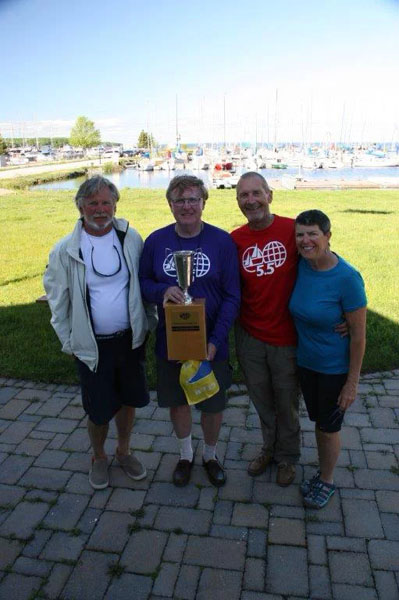 After four days of sailing in everything Georgian Bay could throw at them, O’Kelly CAN 79 sailed to victory in this year’s North American 5.5m Regatta skippered by owner Don Cameron.

Day one dawned with grey and rainy skies, but delivered favourable winds in the 12 to 15 knot range making for some excellent conditions to shake out the winter rust from their sails.

Creative crew recruitment was required to replace some injured regular sailors and skippers, but eight boats were on the line. Perennial favourite Nantoria CAN 22 took all three races with Summer CAN 80, Savage USA 75 and Purple Haze USA 51 fighting for top three finishes in each race. However Pride US 31, O’Kelly CAN 79, Aeolus II USA 102 and Jill CAN 3 all showed moments of brilliance as the competitiveness of the North American crews is rising dramatically.

In the first race O’Kelly CAN 79 sped out to an early lead, using her new sails to full potential. She took the western outside line as the rest of the fleet jockeyed for position through the centre of the course in the first upwind leg where Nantoria CAN 22 was first to the mark with Purple Haze USA 51 hot on her heels. Sporting her new colours, Pride US 31 was in solid third.

By the third mark Nantoria CAN 22 had widened the gap to an insurmountable lead to cross in first. Purple Haze USA 51 held her spinnaker for all the advantage to push forward from fourth to second around the leeward mark to take second place and Summer CAN 80 turned in a strong third place finish.

Race 2 saw O’Kelly CAN 79 again leap out taking a clear path at the pin while the rest of the fleet endured a log jam at the other end of the line. However by the windward mark Nantoria CAN 22 was in the lead again with Pride US 31 working the advantage of the eastern path to round in second. Summer CAN 80, O’Kelly CAN 79 and Purple Haze USA 51 battled it out for third in the early going.

Late in the race Savage USA 75 found her stride, chewing up the distance in the last leg, reeling in and passing the rest of the fleet except for Nantoria CAN 22 and sailed across the line in second place.

Summer CAN 80 came out ahead of Purple Haze USA 51 to take third spot.

In Race 3 Pride US 31 was primed and ready to roll, gunning for the line with an excellent start and making it the windward mark ahead of the others. Nantoria CAN 22 was in an unfamiliar eighth position.

By the second mark Savage USA 75 rounded first with Purple Haze USA 51 on her transom and Nantoria CAN 22 sneaking up from the back of the fleet. Unfortunately both Pride US 31 and Aeolus II USA 102 had to withdraw from the race with equipment issues and the last race of the day would end with Nantoria CAN 22, Savage USA 75 and Purple Haze USA 51.

After numerous equipment upgrades O’Kelly CAN 79 was in the hunt all day but Don Cameron said she experienced some difficulties. “Anything I hadn’t replaced broke, including the lines for running backstays and my cunningham. On the other hand, I was running with a brand new jib and main which performed fantastically.” 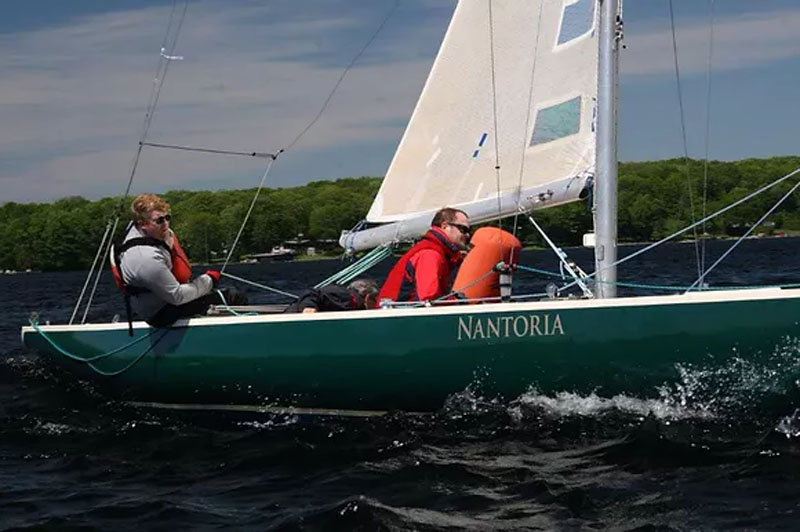 Friday rolled in with 30+ knot winds forcing race committee to delay the start until late afternoon and only fit in one race before damaging conditions returned. Jill CAN 3 paid the price with a snapped tiller while hard on the heels of Savage USA 75 who would cross in first. O’Kelly CAN 79 rounded into fine form with a strong second place showing followed by Aeolus II USA 102 and Nantoria CAN 22, this time skippered by Texan William Turner who joined the North American 5.5m regatta for the first time.

Turner hails from the storied Corinthian Yacht Club in Houston, the former home to 5.5 racing in the heyday of Ernest and Albert Fay in the 1950s and ’60s. Making the trip to Midland for the first time was an easy choice for Turner and crew Tal Hutcheson.

Turner had connected with American 5.5m contact Dan Rossi who encouraged him to come to Canada. “I really wanted to get involved. I have been waiting for a North American fleet to return since the 5.5 class abruptly left North America 20 years ago. It really was an easy trip.”

He was not disappointed. “Where else can I experience multiple boats of 50+ years in this format? The people and common love of the history/sport is probably the best part.”

Three boats rotated crew to ensure the Texas team got a feel for the fleet so results for Jill CAN 3, Nantoria CAN 22 and Savage USA 75 were not counted towards the overall standings in the spring regatta.

In Saturday’s drizzle crews tuned up with a course race won by O’Kelly before heading out for a distance race of 7.5 nautical miles to truly test the boats and crew.

There were multiple lead changes as skippers milked every advantage in the rapidly deteriorating conditions. Their patience was rewarded as the wind freshened for the final leg. “We really dialed O’Kelly CAN 79 in, almost catching the lead boat on the final upwind leg. It was both exhilarating and we had O’Kelly CAN 79 sailing better than ever before.” Purple Haze USA 51 would claim the distance victory. 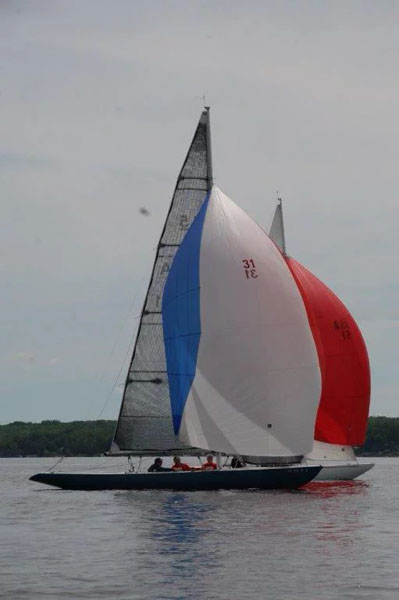 The final day of racing under sunny skies would see three courses completed with lighter winds and more powerboat wake to make it interesting. Highlights of the day included excellent starting strategy that would see Aeolus off the mark with a healthy lead in the first race and a well-played spinnaker run by Savage USA 75 (skippered by Turner) that had her riding a timely air pattern to the second mark to gather speed and following a skillful spinnaker dump, round with speed to pass the bulk of the fleet into third while other boats stalled at the mark in light air.

The second race served up a hole at the mark followed by wind filling in again quickly making for an interesting race. Summer CAN 80 (helmed by Shark skipper Matt Cowan) and her crew were ecstatic to register their inaugural first place finish with O’Kelly CAN 79 closing fast for third.

Jill CAN 3 had a lovely start in race 3 and the day finished with a race that saw multiple lead changes and the entire fleet within eight boat lengths of each other around the third mark. Savage USA 75 would come out on tip, followed by O’Kelly CAN 79 and Purple Haze USA 51.

Cameron credits his crew for their outstanding finishes on the final day. “We had very good starts and we stayed out of trouble and managed consistency in our finishes. Sailing with a more experienced and enthusiastic crew (rather than dragging my adult children to the regatta) made a big difference! I couldn’t have won without my crew of Stuart Bletcher, and Jeff and Barb Proctor.”

The final tally of results put O’Kelly CAN 79 in first, Purple Haze USA 51 second, Summer CAN 80 third, Aeolus II USA 102 in fourth and Pride US 31 in fifth.

Dan Rossi heads the American 5.5 group while John Lister is the Canadian 5.5 contact. Both were pleased to see O’Kelly CAN 79 take the trophy, donated by German Thies Forst.

Rossi said, “Don has one of the hottest boats in our fleet. He jumped in with both feet a couple of years ago and seized the opportunity to get an Evolution. After a season of sailing just a couple of regattas he pulled the trigger on a set of Dacron sails and has jumped to the front of the fleet. His efforts help raise the bar on the racecourse, attracts other potential new owners and grows our EVO fleet.”

It’s all part of the overall evolution of the fleet, skippers and crews. “Boats have been improved and noticeably some have been outfitted with new sails and not just Dacron,” Rossi said. “It’s also evident on the racecourse with the position changes, spinnaker sets and takedowns at the mark roundings and tight finishes between boats. Some of the boats that were in the bottom are now finishing near the front.”

Lister agreed saying, “It was great to see Don get his boat moving well in this regatta. With his new sails and work fixing up the boat ‎he has shown how it pays off. It is great how two years ago he went out on a limb, bought his boat and today he is the champion. I think the whole fleet did so much better this regatta.”

Racing brings everyone together, but there is a larger goal in mind. “Hosting the two regattas is the tangible focus of the group,” Lister said. “But in the process we are hoping to bring more 5.5s back onto the water with people buying them and fixing them up.”

His goal is to rejuvenate the fleet, connecting more 5.5s with new owners. “I think we will continue to locate and acquire old 5.5s and hopefully get them into the hands of keen owners. Personally, I will be ever so delighted when we see 15 5.5s on the start line. We are close to reaching 10 now and hopefully we are at a significant turning point.”

Tapping into the enthusiasm and knowledge of sailors like Turner is vital as he plans to return and bring other CYC sailors with him. “I hope to contribute to the fleet and expand this format to other venues for year-round racing in the US and Canada.”

The fall regatta is set for September 20-22 in Midland. Contact or for information on the 5.5s in North America.