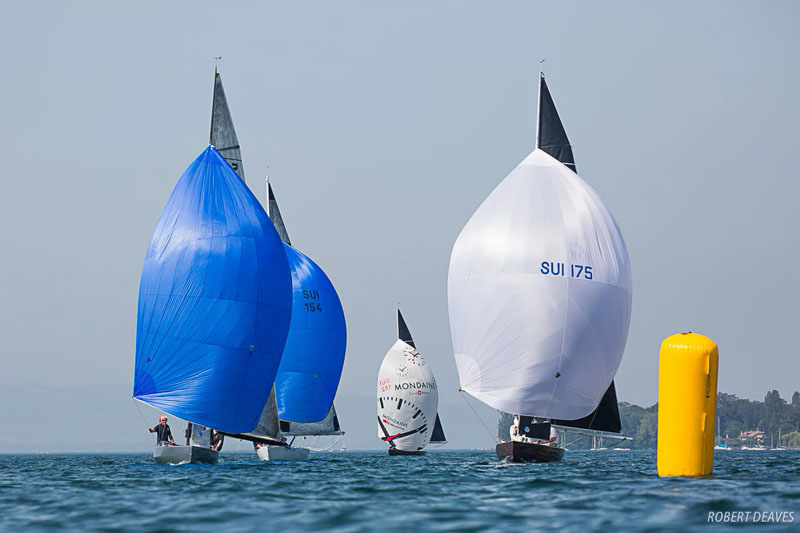 After the first day was lost with no wind, Friday was expected to bring good conditions – actually the only day of the four-day event when wind has been forecast. So it was with a feeling of repetition that AP was hoisted and the fleet kept ashore with no wind on the lake. It was also blisteringly hot again.

However it didn’t last long and sensing some wind coming down the lake, the race committee sent the fleet afloat. The wind took some time to come but then built and shifted to settle at around 7-8 knots for most of the day, which allowed four good races to be sailed.

Race 1 was sailed in very light conditions before the breeze began to properly build. Shaolin (SUI 226 Cyrus Golchan, Andreas Kindlimann, Hans Von Werdt) led at the top, but Caracole took the lead on the first downwind and held on to win from Marie-Françoise XIX and Nina (SUI 215 Falk Einecke, Ronald Röseler, Nils Schröder).

The top mark was moved for Race 2 as the normal breeze became established. Marie-Françoise XIX started near the pin and was first to tack to the right, going almost all the way to lead into the top mark and sail away for a comfortable race win. Pungin sailed a great race to cross second with Feng Shui (NED 26 Arend Jan Pasman Ron Azier, Jan-Peter Kurvers) in third.

With the 5.5 fleet it only takes one mistake and you are spat out the back pretty fast. The right side was looking good in Race 3 as well, with most of the fleet taking that side, but half way up the first beat a big left shift came in and left the right side struggling to come back. Caracole was first to hook into this shift and made a huge gain on the fleet to win her second race of the day, this time from Nina and Pungin. Marie-Françoise XIX finished in ninth, never able to recover from the first beat.

Marie-Françoise XIX put that behind them for the final race of the day to again dominate the right side to lead round the top mark and again sail away for a big win over Pungin, with an even bigger gap to Shaolin in third. 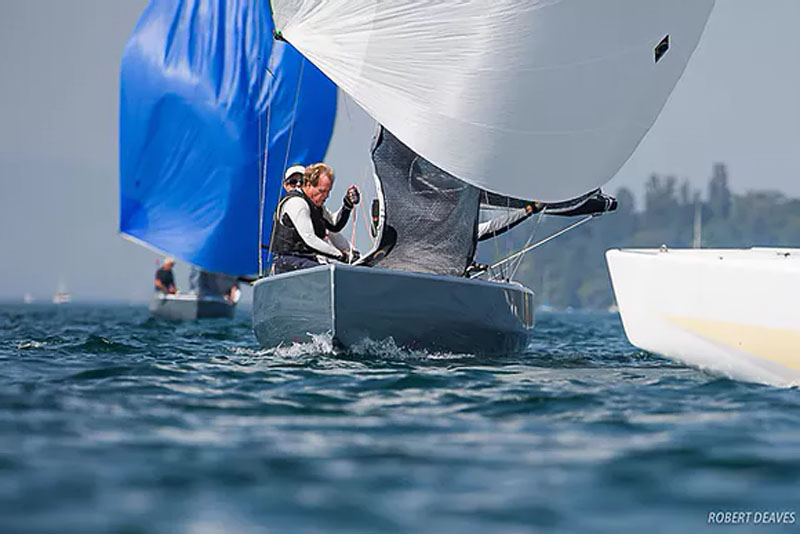 Bernard Haissly, skipper on Caracole had this to say. “I think we had very good conditions especially after yesterday with no wind at all. They took some time for the wind to settle, but then it was relatively stable in strength and direction. We are very glad that the decision was made to race four times today because it would be a pity not to make use of the wind today. Tomorrow we don’t know what the wind will be but at least we now have four very nice races.”

“We had a little bit of luck on the first race when we had a very good tack and won the race. Observation was of course part of the luck. In the second race we did something very bad so we were behind. In the third race, I think initially we did exactly the contrary of what we had decided, but it proved to be the right move and were able to keep it.”

“In the fourth race we missed the start after my mistake as helmsman and that prevented us making a second, because the start we wanted. Pungin got it and got a second.” 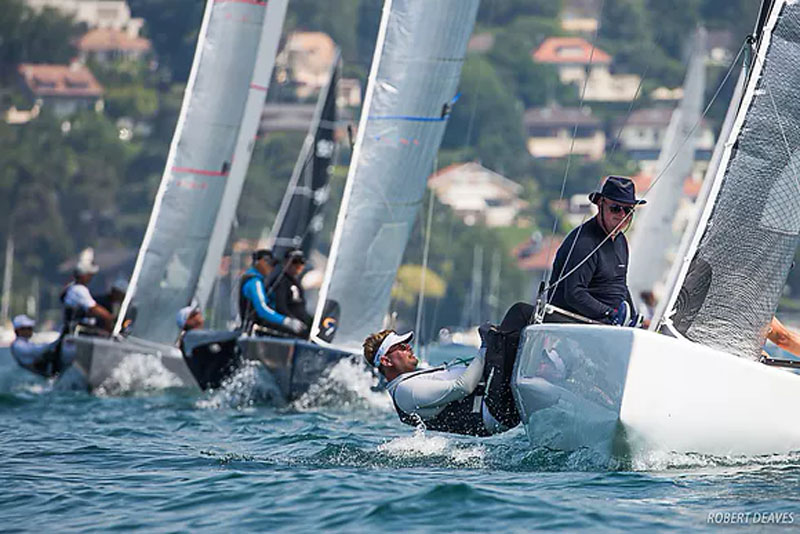 “We struggled a bit. We had a good first race and ended up second. First in the second and then the third race was a bit of a mess for us. We got caught on the right side and wind shifted to the left side and on the last downwind we went the opposite side to everyone else and lost of a few more boats, so we ended up ninth.”

“Overall it was an interesting day. It’s always interesting on the lakes down here but it’s been good racing. This morning we didn’t think we were going out racing, so its been great.”

On sailing with Jurg Menzi, he said, “I sailed with him the first time in the Gold Cup in 2017 in Benodet and then we are sailing this season together. It’s extremely nice. He is very calm and easy to be with, so it’s nice. He doesn’t take too much. Bo and I get fired up and we struggle sometimes, but Jurg is just laughing behind us. He is very nice to sail with.”

Racing continues Saturday with a possible three more races. If a total of six races are not completed by Saturday then racing will continue into Sunday.