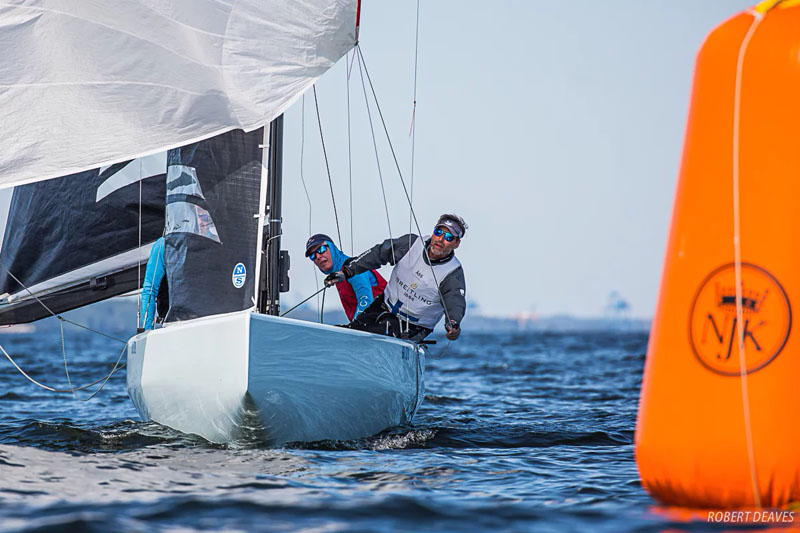 It was a day that promised much more, but delivered two quite tricky and at times frustrating races with the wind dropping out to 2-3 knots in both races. In the first race it shuffled the fleet, while in the second the changes were not so great. Patience and risk were rewarded in equal measures.

Luck does not seem to be on the side of New Moon this week. Again, she rounded the top mark with a clear lead after the first upwind in Race 4, only to see it again disappear like the wind on the second downwind. Girls On Film (GBR 40 Peter Morton, Ben Cornish, Sam Haines) was second at the top, just ahead of Clark Kent (NOR 64 Craig Symonette, Michael Dungston, Marc Ryan), and took the lead on the second upwind, sailing the shifts well as the wind started to go funky.

The final downwind changed everything with Clark Kent following New Moon and Girls on Film, down the left, while most of the fleet went right. While the wind on the left died, leaving them stranded, Beta Crucis went furthest to the right and held onto pressure to sail right around the pack to come in fast (relatively) to the gate and round ahead for a short beat up to the moved finish line. John B also gained on the left upwind to cross in second while Caracole (SUI 214 Bernard Haissly, Nicolas Berthoud, Daniel Stampfli) sneaked into third. New Moon and Clark Kent finished a distant 10th and 11th.

The second race followed a similar pattern, but this time there were no big changes. John B nailed the pin and crossed on the first tack to lead the fleet around for a great race win. New Moon was second at the top, ahead of Artemis XIV and Beta Crucis. These four managed to separate from the fleet and had their own race, with the only change being Artemis XIV passing New Moon o the second beat. The boats finished in barely a breath of wind, while late finishers were able to hoist spinnakers to cross the line. It was that kind of day.

Martin Cross, from Beta Crucis, explained his day, “It was a very interesting day on the water. The wind started of at 10-12 knots and in the first race we didn’t get a particularly good start, and we went right and kept the boat going fast and then took some pain and got back to the left and got back in touch with everyone. It was like snakes and ladders, depending on where you where when the 30 degrees shift came in.”

“And we were very lucky because by the time we got to the last run we were lying about fourth and everyone gybed, except we looked right and we thought there was more pressure and then that’s what happened and we took a big circle route.”

They sailed rod the fleet and led up the final beat to cross first. “And we managed to take the win, which is good for the crew. One of my crew, Bob Stoddard has been in the class for any years and it was his first world championship win since 1981, so he was very pleased and the other crew, Martin Bunch is new guy on the boat, so we really enjoyed it. We had a bad day yesterday when our forestay broke, so today was a magnificent day.”

“Congratulations to Gavin, I think he was the top guy today, with a first and a second, which is outstanding in this type of weather. Very tough conditions.”

Cross’s club, the Royal Prince Albert Yacht Club, is hosting the next World Championship in Australia, next January. “We have great news as well as we have lots of entries coming in and we are looking ford to hosting the 2020 World Championship in Australia. It’s the first time we have been back there since 2005, and I think it was 1986 the last time we held it at Pittwater at the Royal Prince Alfreds. The members and everyone are really looking forward to having an outstanding world championship. We hope, as it was with the 200 Olympics, the best ever.” 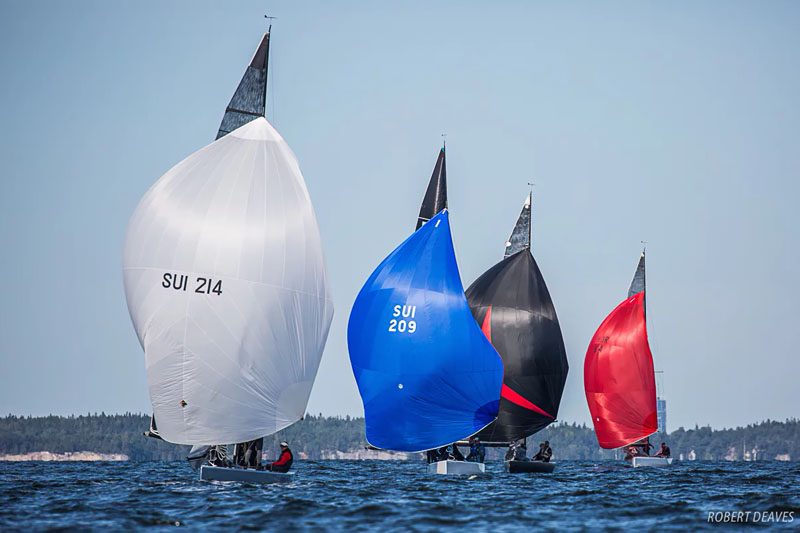 Gavin McKinney, from John B, said “The first race crapped out on everyone and we were quite far behind, and on the second run we thought we saw some pressure coming over from the right side and we gybed over and for once we were right, and we had better pressure than the boats that went around in front of us. And it was just enough to get us down to the gate in second and we just followed the leader into the finish.”

“I have been having some very bad starts but the in the second race we started at the pin and got out clear and tacked and had the fleet beneath us. We managed to hold everyone off. We had New Moon and Artemis XIV breathing down our necks but we managed to get away from them downwind and then we just covered the all the way to the finish. So happy boys. Finally two good races.”

“Yesterday we had a sixth and an eighth and just couldn’t put a foot right. Seems like off the start line, whoever gets that first good hit is gone and quite difficult to catch and races that we were sixth and seventh five minutes into the race, we were 500 metres behind the leaders and today we managed to be those leaders. We had a nice slant going up the left side and picked off points to tack in the little shifts and we got it right, so it was a nice day for us.”

Wednesday's races have produced a very tight scoreboard with the top four boats within two points. With five races done and four more to go, this championship is still wide open, however after one more race the discard will come into play. 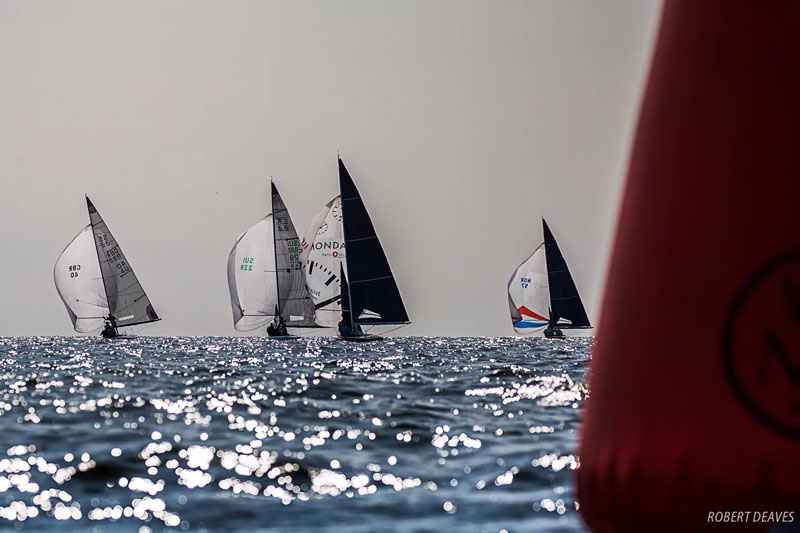