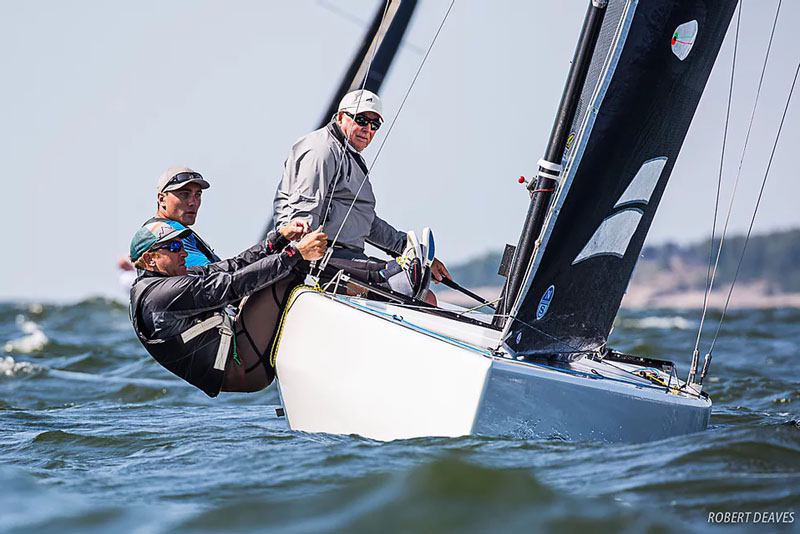 No racing was possible on the fourth day of the 5.5 Metre World Championship in Helsinki, Finland, with no wind on the race course, despite a healthy breeze back at the sailing base at Nyländska Jaktklubben in the centre of the city. Two races are planned for Friday to conclude the series, and with the top four boats split by only two points, it is going to be an exciting conclusion to two weeks in the Finnish capital.

The forecast for the day was not good and with less than 5 knots of wind on the race course, the race officer hoisted AP over 2, to keep the fleet ashore, hoping for a light sea breeze by mid-afternoon. By 14.00 it was clear nothing was going to happen, so racing was abandoned with a start time for Friday brought forward to 11.00. ​ One of those in contention, just two points off the lead is newcomer Girls on Film, GBR 40, skippered by Peter Morton, from Britain. Girls on Film was the only boat to take a race win from Artemis XIV in last week's Scandinavian Gold Cup.

“This is our first year in the 5.5s having been slightly pressured into buying one by Peter Vlasov, but it’s been great fun this week. We are certainly learning a lot about the 5.5 and we are very happy with our speed, though probably we’ve not been as smart as we should and our boat handling is probably a little bit suspect, but we are enjoying it.”

So far this year he has sailed the Alpen Cup in Garda and Hankø Race Week before coming to Helsinki.

“I have always looked at them and thought they were really cool boats, and I quite like the idea of only having to organise two other crew, but it was mainly driven by Peter, who when I met him in Cowes last year when we helped the fleet with the launching at the shipyard, said, 'Look this is the 100th anniversary of the Scandinavian Gold Cup and the 5.5 originated in the UK with Charles Nicholson building the first boat, so it would be wrong and a shame if there wasn’t a British boat taking part.'" 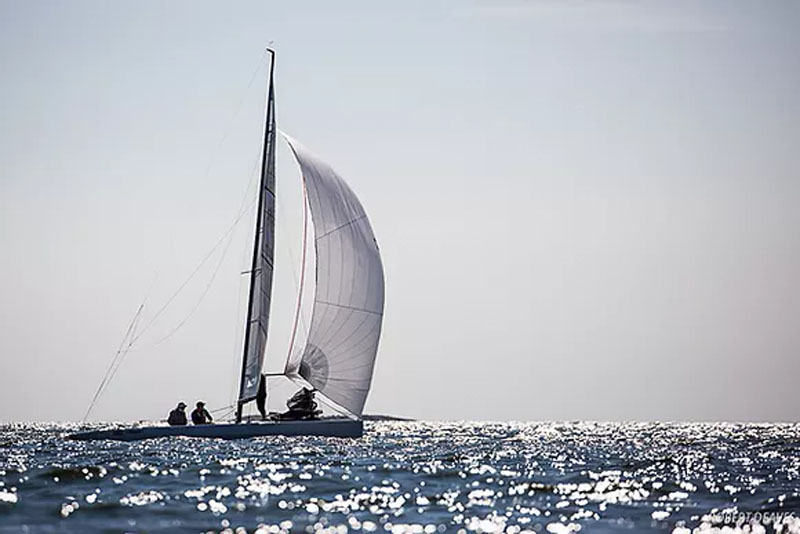 He bought NED 31, a 2003 Wilke boat and had her refurbished. This week he has Ben Cornish and Sam Haines crewing for him.

“Ben sailed with me on the Fast 40, Girls on Film, two years ago before he did his last Finn campaign, so Ben and I have been sailing together for years. And at the front in Garda we had Andrew Palfrey, who couldn’t race this week so we have Sam Haines, who is a sailmaker from Australia.”

On growing the class. “Well hopefully. Obviously there is a limit. It’s not a cheap one-design so it’s never going to have the huge numbers you see in fleets like J70s and Etchells, but frankly, I am not a fan of one-designs. I find boats come and go pretty quickly whereas development boats hang around and there is plenty of evidence to show that.”

“Half the fun for me is the planning and the thought that goes into trying to find the little gains, and I guess my background came from 505s and quarter tonners and even more recently the Fast40, where if you put some thought into it you can make some small gains.”

Day 2 of the World Championship He says he is really enjoying the sailing the boat. “They are great boats to sail. They are really nice. With the guys I have been sailing with this week, Sam Haines, he’s been in the Etchells fleet for years and he was saying what great, fun boats these are to sail. They are tweaky, they are difficult, but they are rewarding. The tacking angles are pretty amazing. You think you’ve got someone covered and then they suddenly tack and are pointing straight at you. It’s like sailing the America’s Cup boats in the old days.”

On the future. “The boat is going to be shipped to Australia at the end of August [for the 2020 World Championship in Pittwater] and so then we are back to the crew we had in Garda, with Ben and Andrew.”

“We have got some ideas for 5.5s and I enjoy that side as much as the sailing, so it’s just a different approach, but I am absolutely not a one-design fan, even though I have sailed plenty of them.”

New boat coming? “Well who knows, at the moment we certainly don’t feel that our boat is slow, and we don’t feel we are sailing it particularly well, so until we see or actually witness a faster boat, then probably not, but it’s certainly something I would consider for sure.”

He says one of the main attractions to him is the people in the class “There are some great characters in the class. I have been sailing for over 60 years and I am only 66, but what I enjoy is the company. There are very few classes where I think the camaraderie is so great. We all go out in the evening together. We socialise a lot and it’s a nice group of people to spend time with and I want to spend time with people who I enjoy their company.”

Looking ahead to Friday’s racing, Artemis XIV (NOR 57 Kristian Nergaard, Johan Barne, Trond Solli-Sæther) and John B (BAH 22 Gavin McKinney, Mathias Dahlman, Lars Horn Johannessen) are tied for the lead with only a one point difference in potential discard. Defending world champions, New Moon (BAH 21 Mark Holowesko, Christoph Burger, Peter Vlasov) are one point back in third, with a larger discard, while Girls on Film, are fourth, another point behind.

The 2019 5.5 Metre World Championship in Helsinki, Finland will conclude on Friday, with a maximum of two races possible.