After Wednesday’s racing was lost because of high winds, Thursday was in complete contrast with no wind at all through the morning. A light southerly moved in after 13.00 and three races were sailed in no more than 7-8 knots with a return to the marina at nearly 18.00. It was a long day on the water, but it was sunny and warm, with close and intense racing.

Shaolin made the best of the opening race to lead all the way to win from Prettynama and Otto. The second race was a bit more messy with Oro Nero (GER 55, Henning Ueck, Jesper Boskamp, Ilse Boskamp) holding the early lead. However a major windshift on the final lap shuffled the fleet and Otto took the win from Shaolin and Ali Baba (GER 84, Wolf-Eberhard Richter, Beala Kallkowski, Jodhim Fohn).

In the final race, Prettynama went to the left side and it worked well “with pressure and lift all the way. We expected it because we thought the wind would go even further left,” said bowman Chabani. Once in front they led all the way to win from Shaolin and Otto.

So Otto goes into the final day with a three-point lead, while Prettynama and Shaolin both have 10 points. Shaolin had the best day with a 1,2,2, but still trails in third on countback.

For the crew on Prettynama, this regatta has been a long time coming. They joined up as a team at the end of 2018, but did not manage to sail together until the came here.

Wiebe de Witte explained how it was going. “We are on a learning curve still because we are still very busy inside the boat rather than outside the boat. Tuesday was good fun racing, really close with the top three boats, and also today very close, so we are very satisfied. Kim and I have known each other for a long time and we are best mates. We race my Max Fun 25 together, but we have always raced against each other in the 5.5. My helm stopped sailing last year and Kim left his boat and Max didn’t have a crew, so we teamed up. And all good so far.”

Henning Ueck, from Oro Nero, likes coming to Cannes each year. This is the fourth time the 5.5 Metres have been in Cannes and he has been to every one. “The atmosphere is great, the water is great, and the wind is normally great. We had good wind two days ago and good sailing today as well, and in Germany it is raining. It would be better if we have a few more boats here though.”

On the day’s racing, “In the second race we were in first place for almost the whole race but lost it on the final downwind because there was a Tofinou in the way and we made a mistake. The wind had shifted 40 degrees and they had an asymmetric flying. Do you try to go over and get luffed or under and lose the wind?"

“We are the last modern 5.5 Metre here. But that’s not a problem as we are few boats and it has been close all the time.”

Joachim Fluhrer is the bowman on Ali Baba.

“Today was a beautiful day. Not much wind but the wind came in and was very gentle. The organisation was great and we had a great day.”

“We are the first Evolution, we are fourth overall and we are still beating two of the modern boats, so we feel quite happy with the results.”

He think they are benefitting from the lighter winds. “The moderns are better in stronger wind, going higher and faster as the wind picks up. If there is not much wind the advantage disappears a bit.” 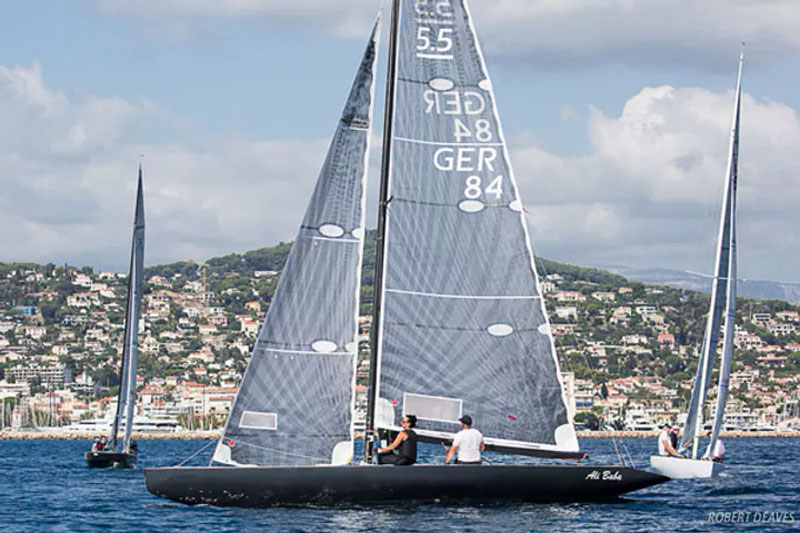 Skipper, Wolf-Eberhard Richter, adds a story about the boat name. “My first boat was an Optimist and its name was Ali Baba. When I bought this seven years ago and I found out that its first name of this boat was also Ali Baba, so I returned to the original name.”

Fohn concluded, “And we had fun today. This is only my second time out with Wolf. We became friends though Joerg [Sonntag] (sailing the only Classic here, Berlin GER 2). Together with Joerg we bought a second 5.5 Metre and that is now on the way to Australia for the worlds in January. The host club, the Prince Alfreds is actually my home club.” 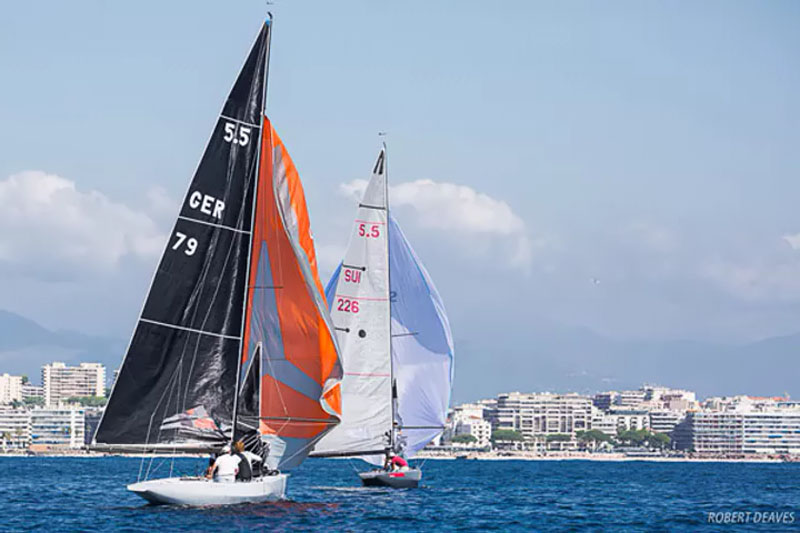