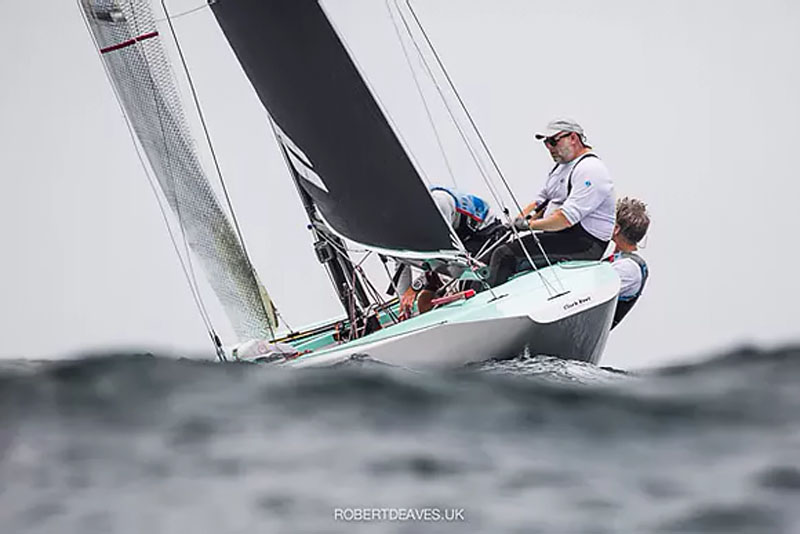 With various forecasts prediction everything from very little to quite a lot, the fleet was towed down Pittwater and round Barrenjoey Head to be met with a very long swell and a shifting light wind. The cloud was still low with bad visibility and smoky skies keeping everything grey and gloomy. The Classics and Evolutions got away about 30 minutes late, but after realigning the course several times, the race committee was unable to start the Moderns until the other fleet had almost finished. However the wait was worth it with better wind later in the day rising to 10-12 knots at times from the north-east.

The Royal Kaag Classic Cup was a classic battle between two sisters boats from opposite ends of the planet. The multiple winner Carabella (ITA 73, Alfredo Delli, Gianluca Marolli, Claudio Mazzanti) was neck and neck with Baragoola. It had come down to the final day.

Jason Antill tells the story. “As I understand it the two boats were built together for the 1968 Olympics and there was a controversy, as the Olympics still needed a long keel and these were the two, and there are a couple of other Britton Chance designs in Europe, that had separate rudders, and they were a step change in the development of yachting in general in all designs, but I think unfortunately there was a bit of fall out and neither of these boats went to the Olympcs and we sent the old Barrenjoey, that had already won the gold but if we had sent one of these, we might have won a second gold medal.”

“For us to be able to have the competition against Carabella over the past three days is just fantastic. We pride ourselves on trying to mix it with some of the Evolutions over the last few years, which we have done pretty well, but we’ve made a big effort, and Larry in particular has made a big effort to try and get the hull and the aesthetics of the boat up to represent the classics.”

Larry added, “Living with Jason is kind of like living on the edge a bit. We call him last minute Jase. We knew we’d get there in the end but at the beginning of today, we had to have two bullets to pull it off, so it was a fine day.” 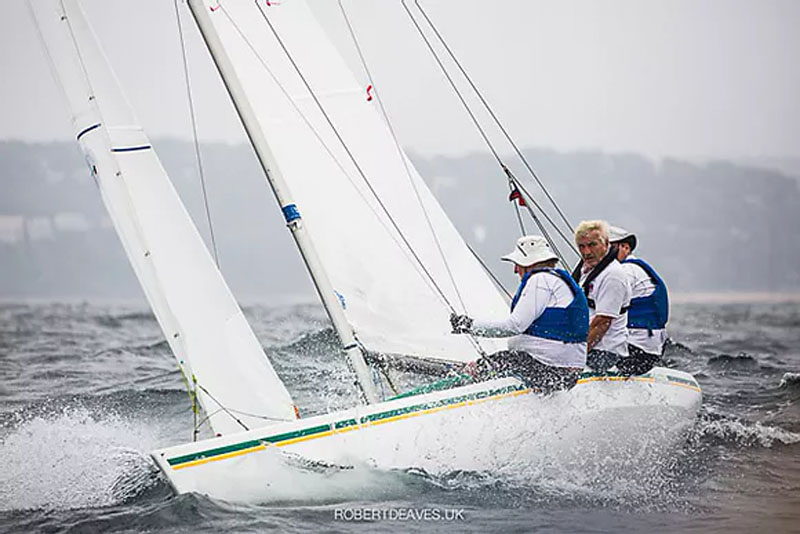 Antill continued, “We had a really fantastic day, after three days of racing. It’s fantastic that our sister ship Carabella has been brought back to Australia by Alfredo Delli] and his team, from Italy. The boat has come back in much better shape than when it left from what I understand.”

“We have put a lot into making the boat as competitive as we can and we are so happy what we have bee able to achieve over the last few days.”

In the first race of the day Baragoola led the entire fleet around the top mark. He joked, “We told everyone that you had to go left and we went right. Just for 100 metres and that was it. It was game over. We didn’t get the greatest start and had to clear our air and as a result of that we were on the right side of the shift, but we had to stay there and we did that pretty well.”

It was the first of two race wins today that meant the two boats tied on points with Baragoola taking the Royal Kaag Classic Cup for the first time ever.

He concluded, “There hasn’t been a strong 5.5 programme in Australia for a number of years and this is the start of rebuilding it.” 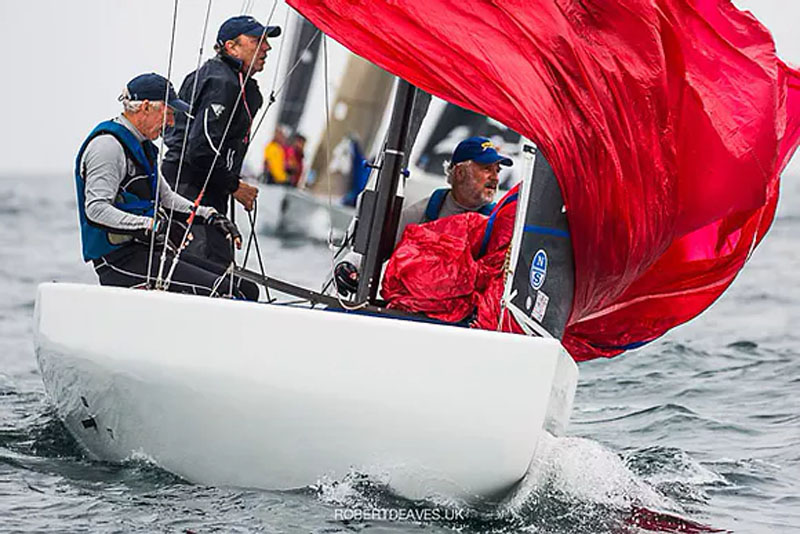 Ku-Ring-Gai had a much easier job in the Hankø Evolution Cup with just one second place enough to secure the series with a race to spare. However, Rhapsody (AUS 35, Thomas Spithill, Chris Links, Heath Walters) laid downa marker for next week with two race wins in the tricky conditions.

“The first day was a bit heinous but two races away and we got two bullets which was a nice way to start. Day two was a lot better conditions, Still a lot of bumps around but a bit lighter. We had some good racing and it was a bit closer until the last one when we got away, and managed to get another two bullets. And today was super shifty, flatter water, which was nice but 50 degree shifts and a very tough day for the race committee. They did an amazing job to get the races away, but Rhapsody managed to show us the way to go, so we were than happy to pull a second out of such a shifty day, so got to come home early.”

Looking ahead, “The worlds is going to be a lot different as we start with the moderns, and you can’t really go where you want to go so much, and also there are a couple of boats that didn’t do the Hankø which I know will be quite quick. All the guys are all getting a lot quicker, like Rhapsody, which put on a new turn of speed today. I think the level will be raised throughout the worlds so we wont have it all out own way, that’s for sure.” 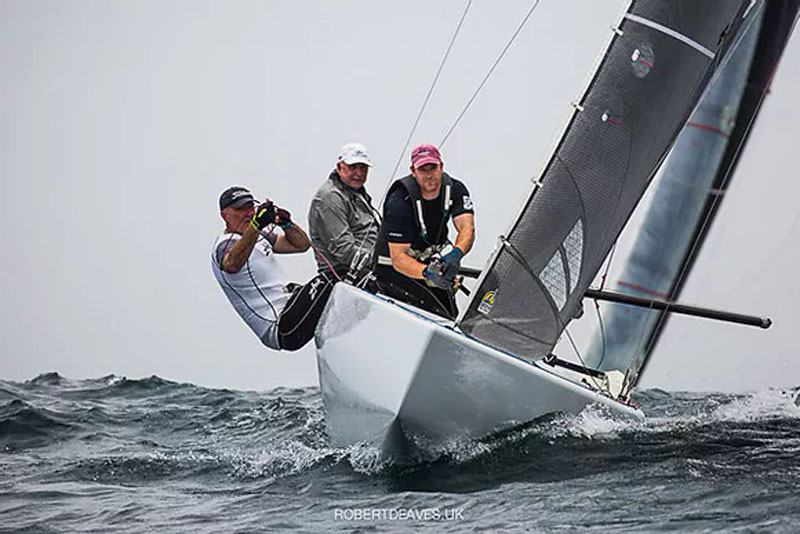 The surprised and delighted winners of the Alfred’s Gold Cup, Clark Kent, were the most consistent, but skipper Petter Fjeld admitted they needed the practcie.

“We just had our last crew fly in yesterday morning so we liked to do these four races as a good practice and tune up for the worlds. We tested some rig settings and different sails and we are quite happy. Of course you should never win the practice race, so we are uncertain how the worlds will go but hopefully it won’t hurt us.”

He has sailed with his crew this week for many years.

“Christen came on board in 2008 and he has been sailing with Kristian Nergaard and is a very good sailor. We call him the Labrador, because he sits at the front and tells us where to go. And he has won the worlds several times and done a few Volvo Ocean Races and now he is tactician for our King, so he is very active and very good.”

On sailing in Pittwater, “It’s beautiful here. When the worlds was decided to come down under we were one of the first to sign up, and because we love it here, we have a lot of friends, there is a lot of history, the climate this time of year is just fantastic. And the Prince Alfred has been beautiful, with lovely people, nice food….and wine sometimes.”

“The worlds is going to be exciting and also I look forward to this famous north-easterly heavy breeze, so we are excited now. But we need a lay day.”

The fleet have Wednesday off to recover, measure and get ready for the World Championship. A nine race series starts on Thursday and finishes on Monday 13 January.