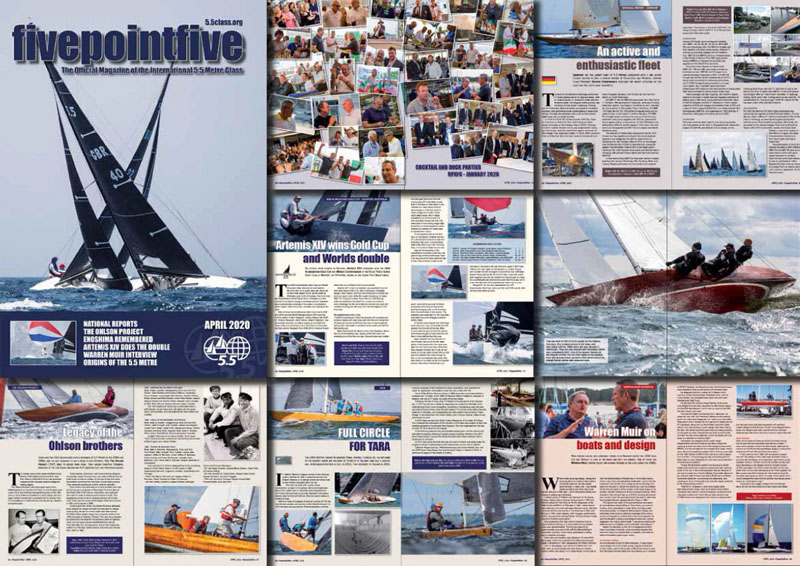 The International 5.5 Metre Class Association has launched a new magazine, fivepointfive, highlighting the increased growth and interest in this classic construction class. It includes all the news from the past year as well as a range of fascinating interviews, technical articles, history and national updates.

You can also read it online here.

Artemis XIV was the undisputed champion of the past year with back-to-back wins in both the Scandinavian Gold Cup and the World Championships in Helsinki and Newport. Both events are covered in detail with 100s of photos throughout the magazine.

Skipper, Kristian Nergaard, said after the 2020 Worlds, “I’ve been with the class for some time, but right now I see that there is more guys coming into the class, there are more boats being built and there is quite a bit of interest and I think that there are going to get more than 20 moderns at future world championships, so that is good. It’s definitely at a good place right now and I think we will see a lot of good sailors coming into the class and lot of interest in the class.”

The fleet in Helsinki included one of the largest groups of Classic 5.5 Metres to be found in recent years with no less than 10 on the start line. The oldest, Trial, dated from 1951. Trial has been in Finland since being built, by L. Wilenius, in Porvoo, to the east of Helsinki.

Ville Harkke said, “The boat was originally built in 1951 to qualify for the Helsinki Olympics [in 1952]. She didn’t. She was second in the qualification races and she has been sailing in the Helsinki area until the late 1990s, and then deteriorated pretty badly until a few years ago we started a renovation project. The renovation was finished in 2017 and this is the third season of her new life, and she appears to be pretty fast for one of the first constructions ever in the class.” 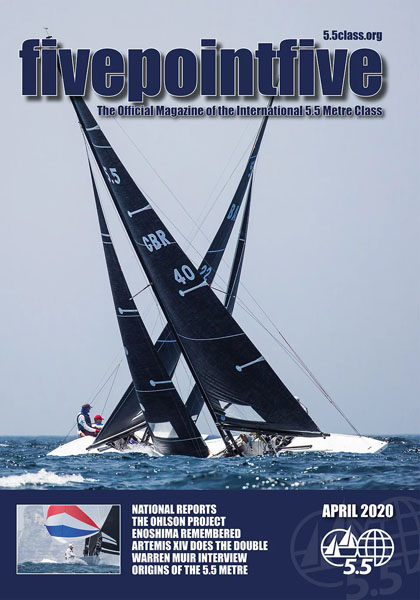 ​​Looking at the class history, the story of Tokyo 1964 is retold, back when the 5.5 Metre was an Olympic Class.

“The design challenge, on the other hand, lost the global characteristics that had been found in Naples. The Japanese fleet was largely from the American design school with nine boats out of the (six by Bill Luders, two by Raymond Hunt, one by Olin Stephens and one by the young Britton Chance Jr. The only European designed boat was from the expert Swedish designer Einar Ohlson, who had a good six boats at the start.”

This issue also looks at amazing legacy of the Ohlson brothers. Einar and Carl-Eric Ohlson were famous designers of 5.5 Metres in the 1950s and 1960s, and the only designers to win a medal at each Olympics. Now The Ohlson Project (TOP) seeks to revive their work. Team leader Christina Stenberg, daughter of the late Einar Ohlson and TOP initiator Lutz von Meyerinck explain.

“At the end of the 1940s, the Ohlson Brothers delivered boat designs for design contests but requests for design work quickly started to come in after their International 5.5 Metre Class design Hojwa won a bronze medal at the 1952 Olympics at Helsinki, Finland. This was not a success by chance but the result of two previous years of rigorous work, but this early success established their names internationally. As a consequence, one of their boats was sailed to an Olympic medal at each of the Olympic Games from 1952 to 1968.”

The Ohlson Project also released a fascinating video of this story recently.

Dave Hollom looks at the origins and birth of the 5.5 Metre Class.

“The origins of the 5.5 Metre Class are interesting because the rule to which they are designed was originally conceived as a rule for full size sailing craft but was not initially used for that purpose. It was instead used as a rule to promote international model yacht racing but it did finally revert to its original purpose, as a rule for full size sailing, with far reaching consequences.”

“The story involves two rival yachting associations, two rival rating rules, two of the pre-eminent yachting journalists and administrators of the day, and in one way or another, the leading yacht designers from both sides of the Atlantic. It also involved what seems like a fair amount of sibling rivalry.”

There are several stories focussing on some famous 5.5 Metres. The 1968 Britton Chance Jr designed Tara, has come full circle. Formerly Complex VI, she has returned to the country where she was built by Vator Oy in Helsinki over half a century ago. After reconstruction in Italy in 2012, Tara returned to Finland in 2019.

“The boat was built with a quite unique construction, as seen in the picture. All the laminated keel floors from rudder post to mast foot were integrated into the frames from gunwale to gunwale. Between those heavy frames were the thin bent frames. Also the boat is without a traditional bilge.”

Then in Saga of the Returning Tide, Jason Antill describes the process and work done on bringing the 1968 classic, Baragoola, back to life and preparing the boat for the 2020 World Championship, where they won both the Classic divisions.

He relates how it started:

"Tommy Spithill: “Jas, what about an old 6 Metre for Woody Point?” Jason: “Mate, I know of a 5.5 Metre on the harbour for sale, I think the rigging was good.” John Bacon: “Yeah, I’ll help you tomorrow. It’s only an East Coast Low, should make the trip quick.” And so it began..."

There are three in-depth, and interconnected, interviews in this issue.

Warren Muir - On Boats and Design tells the story of his involvement in the class.

“It was a boat I could design and build myself, giving me great satisfaction on both sides, and not being able to afford the money to race with the plastic Etchells class that was building up in numbers at RPAYC. Besides, the Classic and then the Evolution boats were beautiful to look at and admire with timeless lines.”

“KA 14, Barranjoey, was the first 5.5 Metre that I had really seen up close besides the ones sailing on Sydney harbour while I was racing my VJ class dinghy. It was built at Jeff Clist Boatbuilding on Roselle bay in Annandale Sydney where I was a first year apprentice boatbuilder. I got to help the tradesmen with all their work, sweep up all the shavings and crawl into the bow to varnish the interior as I was the smallest at that time and glue in all the wooden screw head plugs on the outside, carefully making sure all the wood grain lined up. I then worked on the hull each day up at RPAYC sanding the bottom paint smooth when she was preparing for the races to determine the Australian Olympic representative for Tokyo in 1964.”

In From Hankø to the World, Petter Fjeld describes how he came to the class and what it means to him

“First of all it’s a very nice and balanced boat to sail. The boats are pretty and the different designs fascinate me. Very important is also all my good friends from around the world. We are an international family that gathers at regattas and for holidays.”

“The class needs sailors that are willing to build boats and take a risk. This is building the second hand fleet and pushing the new designs forward. It’s risky but some owners are attracted to the whole process of designing and building a new yacht. A 5.5 Metre is still relatively a small boat and the risk is a lot smaller than a 50 footer.”

After period of building and sailing 5.5 Metres from 1978 to 2005, Colin Ryan has been out of the class for 15 years, but is now back having acquired SUI 209, Otto, in partnership with his son Marc to campaign in Europe. In Ozwegian Comeback, he talks about his time in the class, his thoughts on design and development and some great stories from past events.

“I think as always class building is what it’s all about. I can see there have been great improvements with class promotion, but we also need to work getting the new boat cost down and we need to make sure that everyone is doing the right thing and the Class Rules are observed.”

“You’ll find as usual the top sailor’s priority is a good sailing venue, fair conditions, good true breezes and they don’t care too much about the other things. The sailing is the primary thing. The 2020 Worlds at RPAYC has received rave reviews from the Internationals and that bodes well for the future and another southern hemisphere World Championship in Australia, which in the past were about every six years.”

There is also a great technical article from Christoph Burger, the 5.5 Metre specialist with North Sails in Switzerland, and a double world champion in the class, who answers some common questions on sail choice, rig setup and trim tabs.

Other articles look at upcoming events, some now overtaken by current events as well as national reports on current activities in Finland, Italy, Germany, Australia, France, Switzerland, Canada and the USA.

Production of this issue would not have been possible with the enthusiastic advertisers, so thanks to The Island House, Wilke, Mondaine, Storm Event, Clean Seas/Artemis XIV, Wight Shipyard, Piantelle, North, John Bacon/RPAYC, Octillion Invest, Luminox, Gotthard Partners, Bahama Ferries and TSH Aviation.

Copies have been distributed free of charge to all 5.5 Metre class associations worldwide, but you can also read it online here.

fivepointfive magazine is edited and published by Robert Deaves on behalf of the International 5.5 Metre Class Association. 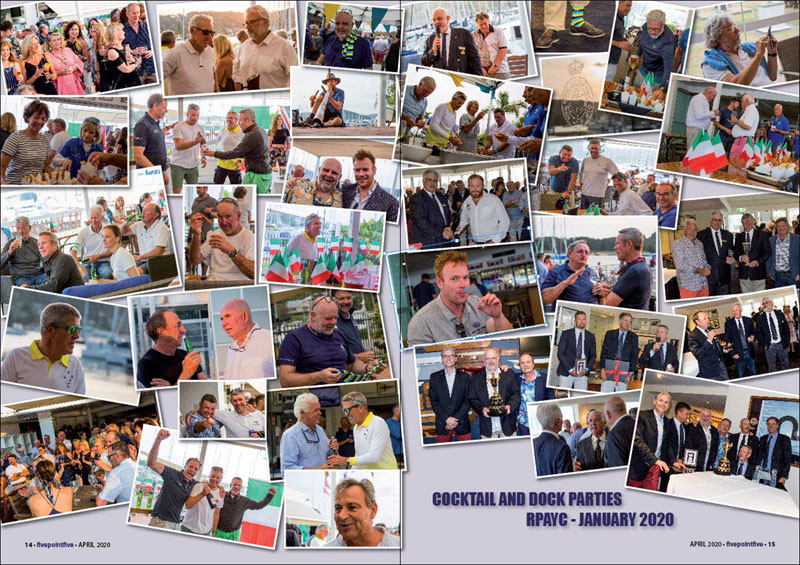