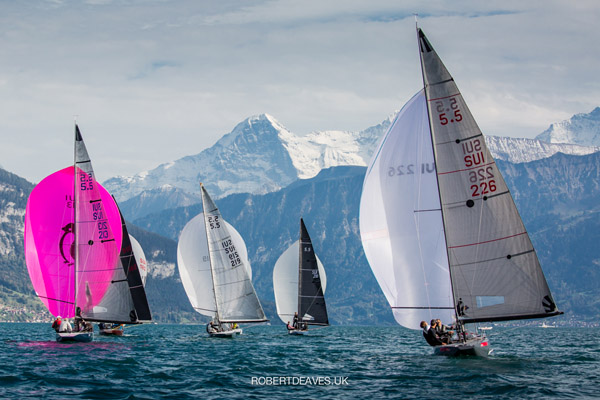 With a forecast of very little wind, the fleet settled down to wait at the Thunerse YC in the hot sunshine though the air was quite cold as the first snows had recently appeared on the mountains at the end of the lake. But a light breeze appeared early afternoon, topped out at about 8-9 knots and just lasted until the end of the second race.

After a general recall, Avalon (SUI 210, Beat Aebischer, Aaron Teuscher, Christof Gerber) led round the top in Race 1 from Marie-Françoise XXI, who took the lead at the gate and led the remaining legs to win from Pungin and a fast approaching Shaolin.

Pungin The wind had started to die for the start of Race 2 with some huge shifts on each leg. Skylla IV looked to have the lead but ran out of wind just before the top, to allow Pungin and Avalon to round ahead. The next two legs were rather mixed with huge pressure variations and many place changes. Avalon and Pungin dropped to fourth and sixth, while Marie-Françoise XXI and Skylla IV moved up. This time Skylla IV had enough pressure to roll over Marie-Françoise XXI to take the race win with Ali Baba (GER 84, Wolf-Eberhard Richter, Hans Wendland, Beata Kallkowski) coming through in third.

For Christof Wilke, from Marie-Françoise XXI , it is his only regatta of the year. He said, “Actually we were pretty surprised that we had a really good wind today. We started a bit late, but finally the first race was a really nice. The second one the wind was dying so a bit of a lottery but finally was OK as well, so we are very happy with our first and second. It’s good for today.” 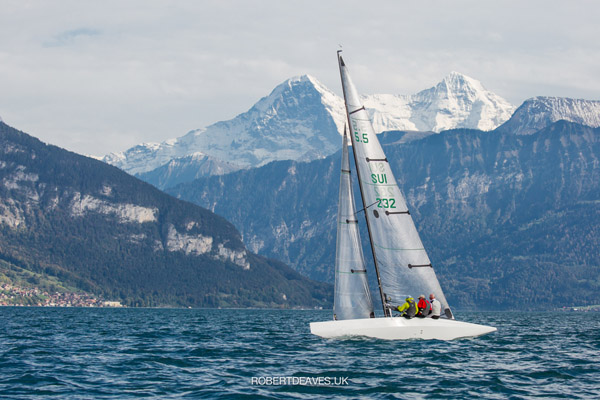 Skylla IV Alex Bernheim, from Skylla IV said, “In the first race we had good wind and a good first upwind, and very bad downwinds, so we lost a lot. The second one was really nice as well. At the end we had not enough wind but enough to finish and we managed to get the first win for me and I think the first win for the rest of the crew for a long time. Very happy day.”

Bernheim took over the helm from his father for the regatta. “For this weekend we thought it was a good opportunity for me to practice helming so he gave me the chance and I managed quite well to day I think. But let’s see how the rest of the weekend turns out.” 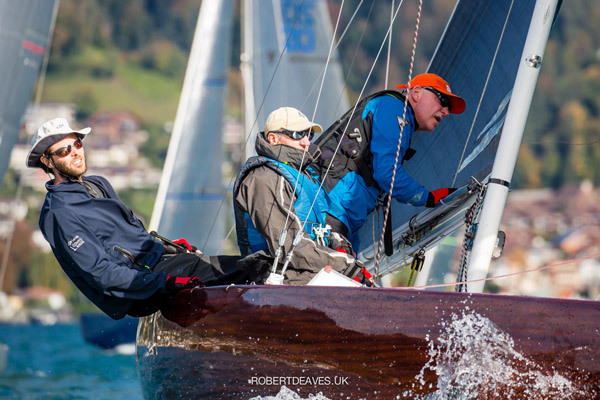 Marie-Françoise XXI has a five-point lead while the next four boats are all on eight points. Saturday’s forecast is predicting rain and a bit more wind.